I can’t stand this tech bubble blowing hagiography that has gone down since Jobs’s retirement as Apple’s CEO. Tech rag Gigaom founder Om Malik found out and cried: “It is incredibly hard for me to write right now. To me, like many of you, it is an incredibly emotional moment. I cannot look at Twitter, and through the mist in my eyes, I am having a tough time focusing on the screen of this computer.” Wired just an hour ago posted an article consisting of fawning billionaires dreamily revisiting touching Him. Come on Om, just take my hand, you can look at Twitter! So much for the illusion of journalist impartiality. Malik’s sentiment is serious though. He is one of the many who’ve gotten rich on selling the illusion of Jobs as a visionary auteur. Silicon Valley, ever the retailers of vaporware–technology that facilitates experiences we neither need nor want nor, often, come to market–needs fantasy as much as Hollywood need the illusion of celebrity to prop ups its market domination in the selling of stardust.
Jobs is an excellent example of the way a social imaginaire comes into form through corporate performance. Philosopher Charles Taylor calls social imaginaires “the way people ‘imagine’ their social surroundings, and this is often…carried in images, stories, and legends.” This notion goes back to Sahlins’s “charter myths,” B. Anderson’s “imagined communities,” and Ortner’s “serious games.” Social imaginaires are internalized and form a range of practical responses not unlike Bourdieu’s “habitus.” Anthropologists are good at recognizing the mental hardware that drive action. This may be a product of our emphasis on para-biological motivation (“culture”) as well as our methodologies. Look at the emphasis on narrative in the works of Richard Sennet and Paul Rabinow, both investigating the new economies of technology through subjective stories about work and its meaning.

Anthropologist Chris Kelty, influenced by Taylor, carried the imaginaire into the world of technology with his notion of the “moral-technical imaginaire” which is a cultural situated and persuasive moral philosophy attached to the use of both open and proprietary systems. Patrice Flichy in his book Internet Imaginaire uses the work of Paul Ricœur to show how utopian and ideological discourse are two poles of a technological imaginaire. The original euphoria of a technology is utopian, as that fades, the imaginaire is mobilized to hide or mask the ideological and dominating potential of the technological assemblage. More recently, sociologist Thomas Streeter, discusses how “romantic” imaginaires of ruggedly individual hackers, inventors, countercultural tramps, and psychedelic engineers helped to encourage the federal funding and venture capital that built the infrastructure of the internet. Finally, the most accessible of these accounts of internet imaginaires is the work of Vincent Mosco who simply refers to the myth of technological transcendence with the idea of the “digital sublime.” The transhumanist movement is ripe for such an analysis.

Certainly Jobs is not that which is performed. Apple and complicit tech journalists have done everything to maximize the illusion of Jobs as master auteur. It fits a neat trend in technology history. First there was Marc Andreessen, the boy wonder of Mosaic/Netscape and the internet bubble of 1994-2000, photographed barefoot on the cover of Time in 1995 at the dawn of Netscape’s IPO. The hype surrounding him fomented in a rush on the NASDAQ and its soon collapse. Consumers were left with an awesome internet infrastructure because of the build up but also with a generation of creative workers and investors who lost their jobs and millions of dollars. Most of the educated and middle class information workers got back on their feet and are enjoying the Web 2.0 bubble only partially squeezed by the global financial crisis of 2008. The point is that social imaginaires are not just in our heads.

They have real consequences. Apple got filthy rich and Jobs too. Despite taking only 1$ as an annual salary (what a saint!), his stock options at Apple and Pixar total over $8 billion. Apple surpassed the US Treasury’s total bankable savings and peaked over oil giant Exxon in market cap both this year. Secondly, Apple’s mythology has a lasting legacy as a dominant player in the promotion of closed platforms and monopolistic power.

Tim Wu, best-selling author of The Master Switch: The Rise and Fall of Information Empires, and coiner of the term “network neutrality,” says he fears Jobs above Zuckerberg and other information mavens. He describes Jobs’s imaginaire and its power: “Steve Jobs has the charisma, vision and instincts of every great information emperor. The man who helped create the personal computer 40 years ago is probably the leading candidate to help exterminate it. His vision has an undeniable appeal, but he wants too much control.” Despite Jobs being metaphysical, his impact is fiercely physical.

Despite his utter disdain for philanthropy and open systems, I hope Jobs is healthy and lives a long retired life but I fear his legacy. Stay with me here, I love the 2005 Stanford commencement speech, too. The part where, after dropping out of Reed College and while dropping in on classes, he begins to notice the fantastically efficient and yet elegant calligraphy everywhere–that is pure theatrical genius. What an origin myth for the smooth coolness of my iPhone! Jobs’s saintly genius is a carefully orchestrated performance by Apple, tech journalists, venture capitalists, and MacBook fanboys to create an illusion that we are blessed to be typing away on technologies of such holy grandeur. As this narrative grows so does Apple’s stocks. Social imaginaires like that which circulate around Jobs are stories we tell ourselves about ourselves with real impacts in the world.
Apple products are great, I’m using a couple right now. But the spiritual intonations describing Jobs’s role in the production of these easy to use, trendy, flashy, and expensive devices is overstated for a purpose. The auteur visionary, who throws off tradition, rises from the ashes and returns, and kills a rigid bohemoth (Gates) are all narratives that help to sell products and stocks. These stories encase the casings of Macbook and iPads with a genius virus that users mistakenly think is contagious. I am going to go out on a limb here and say Apple products were not necessarily the best systems for the design and film production worlds, it was the narrative of Jobs as sympathetic master that made the creative industries believe that Final Cut Pro was necessary. Us filmmakers and designers wanted to be in on the magic. Eventually FCP and Quicktime became their own standards and we all were stuck using Apple products.Jobs is a hallucination with physical properties. There is no better illustration of this then how the market responded to Jobs’s illnesses. In mid-2009 Jobs got a liver transplant and took six months off, Apple’s market cap plunged $100 billion. Earlier this year he took another medical leave and again the market cap dove. Rational markets? 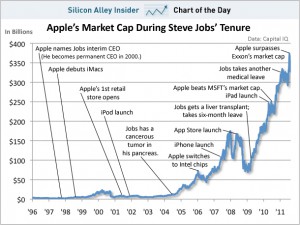 Look, call me unimaginative but I want to live in a world whose major systems–government and markets–are ordered by consensual rationality. We currently have a spate of GOP candidates that both think the market is rational and that global warming and evolution are hoaxes. This won’t do and is alike the hype surrounding the myth of Jobs. Both Jobs and the GOP are irrational and the result of journalistic laziness and consumer dupability–a legacy of the increasing subsumption of neoliberalism into all walks of American life.  If anthropologists got access to tech firms such that sociologists David Stark, Gina Neff, and Alexander Ross have, and showed that design is a collaborative and multi-authored act, we wouldn’t be so easily manipulated by the digital sublime. If the computers in front of us weren’t black boxes, and we could program instead of being programmed, as Douglas Rushkoff says, by corporate supported and irrational imaginaires, then I think we could move closer to a critically discursive public sphere. I want to see imaginaires as they are, necessary mythologies, while at the same time I want to trim away the fatty and unnecessary hyperbole around their edges.
Blog postactivism, Commodity, corporate anthropology, digital media, digital media firms, In the Press, internet, media studies, open access, STS, Technology, web 2.0