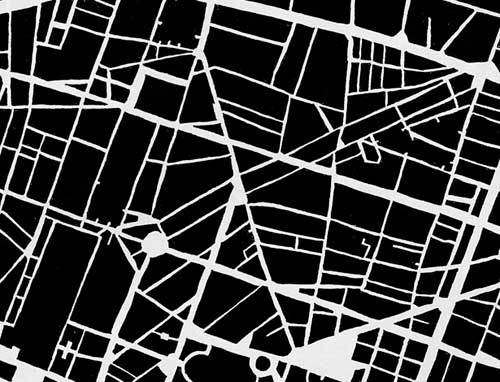 In James Scott’s book Seeing Like a State, he compares the rise of surnames to the layout of Baron Haussmann’s Paris, with its wide boulevards designed (in part) for easier crowd control, to the rise of surnames. Both serve to make that which is legible only to local citizens more easily seen from the bird’s-eye view of the state.

The invention of permanent, inherited patronyms was, after the administrative simplification of nature (for example, the forest) and space (for example, land tenure), the last step in establishing the necessary preconditions of modern statecraft. In almost every case it was a state project, designed to allow officials to identify, unambiguously, the majority of its citizens. When successful, it went far to create a legible people. Tax and tithe rolls, property rolls, conscription lists, censuses, and property deeds recognized in law were inconceivable without some means of fixing an individual’s identity and linking him or her to a kin group. Campaigns to assign permanent patronyms have typically taken place, as one might expect, in the context of a state’s exertions to put its fiscal system on a sounder and more lucrative footing. Fearing, with good reason, that an effort to enumerate and register them could be a prelude to some new tax burden or conscription, local officials and the population at large often resisted such campaigns.

The process of imposing patronyms began early in China:

By roughly the fourth century B.C. (although the exact timing and comprehensiveness are in dispute), the Qin dynasty had apparently begun imposing surnames on much of its population and enumerating them for the purposes of taxes, forced labor, and conscription. This initiative may well have been the origin of the term “laobaixing,” meaning, literally, “the old one hundred surnames,”which in modern China has come to mean
“the common people.” Before this, the fabled Chinese patrilineage, while established among ruling houses and related lines, was absent among commoners. They did not have surnames, nor did they even imitate elite practices in this respect.

It took nearly a thousand more years for the same practices to be imposed on a large scale in Europe, but for many indigenous peoples, the practice of imposing official naming policies continued well into the twentieth century. In Taiwan the practice began during the Japanese colonial era. In Taiwan having a Japanese name was considered a privilege, and came with an number of benefits. As such, it was difficult to get a Japanese name and Chinese families had to meet a number of requirements before they were allowed to take the new name. The requirements for Aborigines, however, were much less stringent. In some cases they simply had to be able to read their Japanese name. But, at least at first, these names were only allowed to be quasi-Japanese as they were forbidden to use common Japanese surnames. [Read more here: PDF.]

Later, after the KMT took over Taiwan, they imposed Chinese-style names on Taiwanese Aborigines. This time it wasn’t a privilege, but a requirement. Only after the Personal Names Act was amended in 1995, were Taiwanese Aborigines allowed to use their traditional names. However, as of 2005 “only 890 out of the total of 460,000 aborigines in Taiwan have done so because of the past stigma attached to the names and the complicated formalities involved.” Documentary filmmaker Mayaw Biho made a funny, biting, film about some of the difficulties involved in getting one’s name changed. (For instance, some administrative forms still didn’t have enough spaces for the long names.)

I was thinking about these issues when I saw the following headline in the @savageminds Twitter feed this morning: “Google+ Not Sure How To Handle Traditional Aboriginal Names.” The Lifehacker blog post explains that

Google’s real-name only policy with compulsory first names and surnames can seem overly restrictive is when applied to traditional Australian Aboriginal culture, where an individual’s personal name is a single word.

This bothered me because I had only recently read this Global Voices post about about how many Taiwanese were beginning to use their indigenous names on Facebook.

The indigenous population is very small in Taiwan, and because of that, indigenous people’s livelihoods and concerns are often neglected by society. If they give up their ethnic names, other people in the mainstream society would not be aware of their existence and the indigenous people would turn into social hermits. I can understand, especially for elders, the difficulty of changing names in real life: not just changing ID cards, driving licenses, bank accounts, passports, household registerations, etc.; their established popularity under their Han name may also be jeopardized. To start rebuilding one’s identity all over again is really hard, but adopting ethnic names in the online/social media world can be a good start.

Ever since I started using Facebook, I have noticed an intriguing name-changing phenomenon going on. For example, one indigenous youth used to use his Han name on his profile, but later he has started to add his romanized ethnic name in brackets after, to make clear his indigenous ethnic background. Some [other indigenous youths] are even choosing to replace their Han names with their romanized ethnic names on Facebook, and add their Han names in brackets after. The change he [the aforementioned youth] made caught some of his indigenous friends’ attention, they asked him how to change the account setting and followed his example. It is highly possible that in real lide, the names printed on their ID cards are still written in Han, but they have begun to change their names on Facebook to remind their friends of their indigenous identity and background. This is a way of “coming out” in public as indigenous.

Google’s real-name policy has created a strong backlash among female bloggers and human rights advocates for other reasons, but what I find strange about this is that, at first blush, it seems like a technical problem – the kind of thing that the folks at Google should be able to easily solve. Chinese forms which only provide three spaces for your name are from the same era that only used two digits to write the date. Computers can do better. It upsets me the same way I get upset when a website tells me my phone number is invalid because I didn’t write it as (###) ###-####. As loath as I am to praise Facebook, I was struck by a recent innovation which allows my Chinese name (傅可恩 rather than Kerim Friedman) to be shown to friends using the Chinese version of Facebook. Facebook’s policy shows that the use of real names isn’t just a technical issue.

Why then? Google claims that the policy is a matter of civility, “like when a restaurant doesn’t allow people who aren’t wearing shirts to enter.” Others claim it is for more cynical reasons, such as being able “to provide identity in a commerce-ready way.” I imagine this is very much the same reason why Google wants you to group all your friends into “Circles.” Elsewhere, I’ve written about my problems with Circles:

social networks are context specific. My sister’s boyfriend might be considered a “relative” for purposes of family dinners and sharing of photos, but not for talking about family finances and medical problems. Lists are simply too rigid and static to handle how we actually decide what information to share with whom and when.

This is not unlike what Scott writes when he describes the role of local knowledge: whether of the forest, of the urban environment, or of naming practices. But whereas states imposed surnames and easily navigable thoroughfares upon its citizens, social networks get us to conform to their desired practices by making the process of sorting our friends into Circles more like a game. We create a Google profile (with our real name) in order to increase our own personal Search Engine Optimization (SEO). We want to be seen by the social network so that we can be seen by our friends.