The AAA is asking people in the US to contact their congressional representatives over cuts to the Fulbright program and the NEH – and the possibility of even more drastic cuts in the near future. In addition to urging you to do the same, I wanted to add some comments about the Fulbright program.

I probably would have had to change my research topic if I hadn’t received a Fulbright dissertation grant to come to Taiwan. The Fulbright program was founded by Senator William Fulbright in 1946, and was initially paid for by selling off war surplus. This makes the current situation all the more depressing. The following chart shows where the current debt comes from. 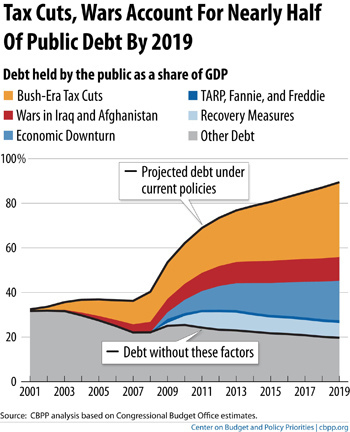 As you can see, half the debt comes from a combination of Bush-era tax cuts and the wars in Iraq and Afghanistan. That means that the Fulbright program, originally paid for out of war surplus, is now being cancelled to pay for war debt.

As Maura Elizabeth Cunningham puts it in her post on the China Beat:

Programs like the Fulbright-Hays grants aren’t just about supporting individual scholars; they have a larger mission of promoting work that collectively helps all of us contextualize the world we live in and recognize how it has come to look the way it does. By not providing the funding necessary to support this year’s crop of applicants, the government is implying that such work isn’t important, that we can exist in a global community but don’t need to understand it.

Unlike HTS, the Fulbright program and NEH fund important research which I believe genuinely contributes to our understanding of the world. It is depressing to see our reckless involvement in two unfunded wars now threatening these programs.