UK anthropologists (and academics) may have spent their holidays poring over, gossiping about, ignoring, or otherwise relating to the release of the results of the 2008 research assessment exercise (RAE).  Those of us outside the UK have probably heard of this gargantuan undertaking that aims to assess the quality of research conducted at university departments in view of better distributing funding.  I think I first heard of the RAE as a prime example of the ‘audit culture‘ that in many places these days seems to be the guiding ethos of scholarship.  Complaints about the RAE, and about audit in general, can be heard far and wide in universities across Europe and elsewhere.  Audits often create bureaucracies that are expensive in their own right, they put onerous burdens on already over-worked teachers and scholars, they replace complex forms of assessment with simplified formulae in order to render research ‘legible’ (assessable) to bureaucrats, truly cutting-edge or paradigm-shifting research cannot be ‘seen’ in this setting, and so on.  All of these criticisms are voiced by some at the Guardian (among other places).  Other emerging complaints include ways that departments can ‘game‘ the system to produce a misleading result.  My understanding of the basic procedure is that departments nominate research staff to submit four publications that are then assessed by a peer-lead panel, each publication being given a ranking (roughly, 4 = internationally important, 1 = unimportant anywhere).  Departments apparently engage in a calculus of how many and which staff-members to include for assessment, in order to yield the highest result.  They may decline to include staff who will not get a high score, or they may hire academic ‘stars’ on unusual contracts, in order to be able to include them.  This article details some of the ways this gaming may have occurred in the 2008 exercise. 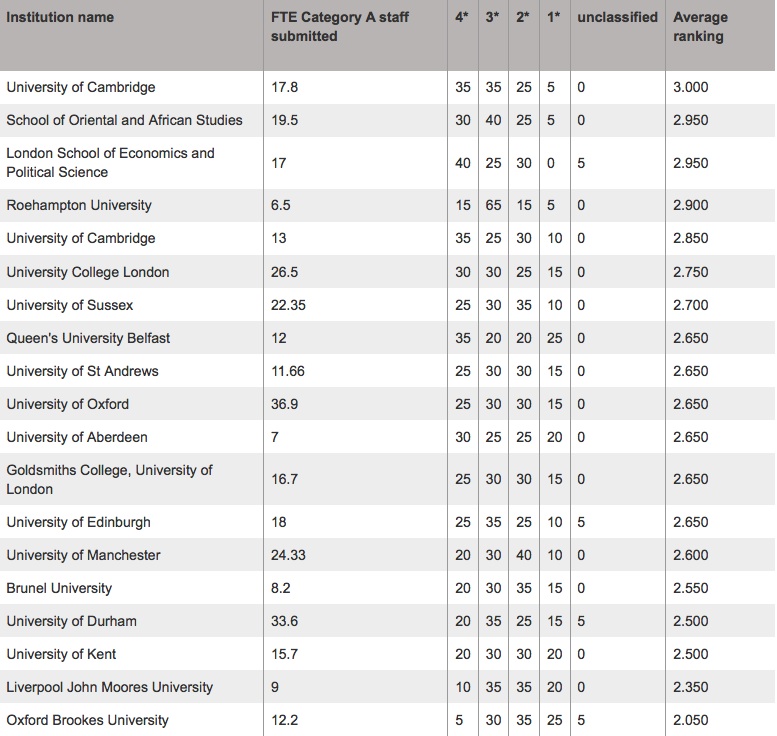 Though I am personally deeply distrustful these sorts of rankings, feeling that that they utterly fail to capture the complex ways in which hierarchies of reputation (which I think are inseperable from putatively objective assessments of quality) are established, they are kind of amusing to talk about.  While the results displayed above roughly comport with my sense of the UK social anthropology scene, one result stood out:  the low ranking at Manchester.  I find it rather shocking that a department with a historical reputation such as Manchester’s should not end up in (even) the top half of the schools being ranked.  What’s up with that?  Meanwhile, this particular ranking of UK departments to me points up the fact that a similar recent assessment of US departments is nowhere to be found (to my knowledge).  The last results from the US National Research Council for anthropology were produced in, when?, 1995?  Anyone care to take a stab at a (purely subjective) Top 10 list of US departments?  What about a Worldwide Top 10?

12 thoughts on “Is Roehampton University fourth best for anthropology research in the UK?”