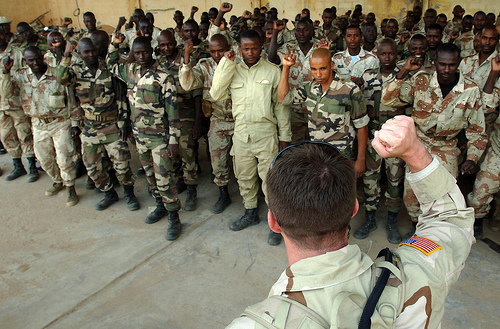 The following is the caption for this photo as it appears on the Defend America military blog:

Although I had not previously seen a picture of this gesture, I had come across it in my previous investigations into issues of cultural miscommunication and translation in the war in Iraq. It is an example which was often used in news stories about the confusion that could occur at checkpoints, since the Iraqi gesture for stop is with the had open, as in the U.S. Here is a blog post, from a soldier recounting a joke told during a briefing session:

The training opportunities thus far have been sparse, but comical. An Irish sergeant from the Brit Army briefed our unit on IEDs–still the number one killer of coalition troops in theater–as well as various checkpoint protocols:

“The insurgents, they’re sayin’ they blow themselves up fer seventy virgins, aye? Well we in the British Army have a policy to deal with this problem: We send them straight to Allah and keep the virgins for ourselves!”

“The British use this hand signal [closed fist] ‘Stop!’ to control traffic at checkpoints. The Iraqis, they use a similar one, [open hand] ‘Oogaf!’ And then there’s you Americans: [points weapon] ‘Freeze motherfucker!’”

But this is no joking manner. Although I believe the number of Iraqis killed at checkpoints has declined, especially (I suspect) as the US forces turn over such operations to Iraqi forces, many, many Iraqis have been killed at checkpoints over the course of the occupation. According to McClatchy from 2006 to 2007 there was an average of one incident (resulting in injury or death) per day. The headline reads: “US troops shot 429 Iraqi civilians at checkpoints.”

Here is what that article says about hand signals:

U.S. soldiers traditionally have used hand signals or signs to tell civilians to stop. If that doesn’t work, they fire warning shots. If the vehicles still are moving too close, they’re authorized to kill.

It doesn’t however, discuss the exact nature of the hand signals used.

If all this seems like an argument for the importance of employing anthropologists in the military – it isn’t. In fact, I was inspired to write this post by my friend Scott Sommers who recently spent some time reading up on McFate and found an article (PDF) she had written in Joint Forces Quarterly. What’s particularly interesting about this article (as pointed out by Scott) is that she seemingly gets the hand gesture story wrong. Here is what she says:

As Scott found, this version of the story was repeated in an article about human terrain teams from the Boston Globe, complete with this picture (from a US Marine publication):

The US forces’ superficial understanding of local tribal customs and ancient ethnic and sectarian rivalries has hampered their efforts in Iraq and Afghanistan. An outstretched arm, palm facing forward, for example, means “stop” in most Western cultures, but in Iraq it’s considered a sign of welcome. Confusion over the signal has had deadly consequences, leading US troops to open fire at Iraqi civilians who didn’t stop at checkpoints.

As far as I can tell the Boston Globe has this wrong, as does McFate. There is confusion over hand signals, to be sure, but it isn’t because the military are using an outstretched arm with the palm facing forward, but are using a unique military gesture which even most Americans would not understand.

In my post on “the myth of cultural miscommunication” I argued that many of these problems were “common sense” and didn’t require the intervention of cultural experts to intervene. In a comment on that post Carl Dyke wrote:

I’m inclined to agree with you, Kerim, but when you talk about common sense in an anthropological setting I get confused. Common to whom, under what circumstances, according to which rituals, restrictions and agendas?

I teach soldiers who have been or soon will be deployed. Like all of my students some of them tumble quickly to the value of taking the perspective of the other, while some are more rule or authority oriented. They seem to have different ‘common senses’ depending on how and where they were raised, where they are in their emotional-cognitive development, their sense of identity and purpose, their levels of stress, and so on.

Conflictual situations are notoriously poor ones for optimizing reciprocity of communication, as the post on the myth of Mars and Venus also shows. Short of a desirable but currently unlikely elimination of all conflict, what sorts of practical steps would in your view improve understanding under these difficult circumstances? Is there a specific way of understanding ‘common sense’ that gets us further there?

At the time I replied that I was “not talking about the common sense of individual soldiers, but of the military as an institution.” Since then I felt that Carl’s question deserved a better answer, and I’ve written this post partially as an effort to do just that.

If we take the McFate account at its word, then we really do have a cultural confusion which could be avoided with the help of cultural experts like McFate. But it doesn’t seem that this is the case. Scott also found this letter written to the Sandbox military blog in which a Company Commander finds that a new soldier does not understand the standard gesture for “stop”:

Now seeing this vehicle drive down the street I wanted to confirm that it was ready for combat. I held up my fist to communicate I wanted him to immediately stop. The Soldier however, interpreted my clenched fist more along the lines of the Mod Squad’s “solid” than as a command. The Soldier returned my “salute” with a wide smile on his face.

As you can see from this example, the strange and exotic culture that needs explanation is not that of the Iraqis, but the US military who have dealt with the problem of cultural miscommunication by creating a universal hand gesture which nobody understands.

In my previous post I used the term “common sense” but I think that oversimplified the matter. Deborah Cameron’s point is that men use miscommunication as a tactic to avoid doing what they want to do. The “Mars and Venus” books are aimed at helping women adjust to this fact by teaching women to better communicate their needs to men. Instead, Cameron argues, men shouldn’t be left off the hook so easily. The problem isn’t that miscommunication is a common-sensical problem – it isn’t. In fact there is a large body of linguistic anthropology literature on the subject, starting with John Gumperz’s excellent work on “crosstalk.” The problem is that this literature all too often overlooks the issue of power as it applies to such misunderstandings.

Similarly, we have a situation here where the US military uses an incomprehensible hand gesture and Iraqis are shot for failing to comprehend. The solution, we are told, is to teach our soldiers to better understand Iraqi culture, when it seems it might be our own military culture which needs to be able to adjust in order to adapt to local conditions.

But it is a “common sense” example in other ways, in that it seems the problem of hand gestures is well known – its just the details which are not. If McFate and company are wrong on the details, then they aren’t doing much good. The soldiers writing letters and blogs seem to understand the problem just fine (without expert advice) and the military needs to figure out how to listen to them. Or even better yet, leave it to the Iraqis to sort out for themselves.

On the other hand, I fully approve of using video games to teach the military about Iraqi hand gestures.