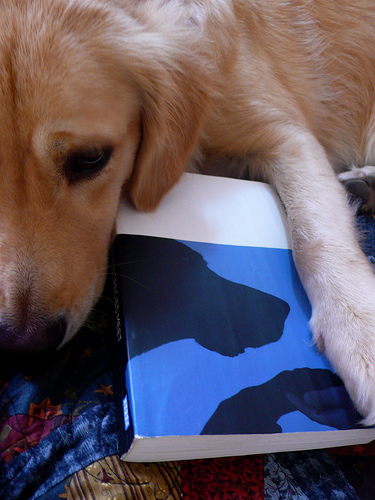 (Inspired by Jonathon Sullivan, I decided to invite my dog, Juno, to write this occasional contribution. Here Juno writes a review of Donna Haraway’s When Species Meet. The review was solicited from Savage Minds by University of Minnesota Press. – K)

I was very happy when my owner decided that we should review this book. Mostly because when he reads a book we can sit together on the couch, which is much more fun than when he sits at his desk surfing the web. I get scratched behind my ear a lot more when we are reading a book.

I also like Haraway. She seems to engage ideas in the same way a dog might play with a dead animal: sniffing it, placing it our mouth, playing with it, rolling on it, barking at it, offering it to our master only to run away with it again. But I could tell my owner was as frustrated by this kind of play as he is when I do it. He likes to play boring, repetitive, games like fetch. He seems to prefer the easy popular style of Patricia McConnell to Haraway’s challenging prose.

Even though its written like those “myths of mars and venus” books he has come to despise, McConnell taught my owner a lot about how to be a good companion species. Haraway, on the other hand, struck him as self-indulgent with its long digressions, reprinting of entire e-mail exchanges, and its stubborn refusal to make any coherent claims which are capable of being wrong. That’s why he asked me to write the review. I understand play.

Haraway like to play with her dog. She seems to be in much better shape than my owner and goes running with her dog everyday. They also compete together in the co-species sport known as agility. I wish my owner was half as fun. He mostly just likes to go for walks or throw a ball while I do the running. But he has read a lot of dog training books and we do some simple training exercises together which is fun, because I always get lots of treats when I’m studying. Haraway scolds Derrida because he didn’t seem particularly interested in playing with his cat. That upset her a lot. She wants us to understand the responsibilities provoked by our encounters with other species.

Here’s how she says it:

When Species Meet, strives to build to attachment sites and tie sticky knots to bind intra-acting critters, including people, together in the kinds of response and regard that change the subject – and the object. Encounterings do not produce harmonious wholes, and smoothly preconstituted identities do not ever meet in the first place. Such things cannot touch, much less attach; there is no first place; and species, either singular nor plural, demand another practice of reckoning. In the fashion of turtles (with their epibionts) on turtles all the way down, meetings make us who and what we are in the avid contact zones that are the world. Once “we” have met, we can never “the same” again. Propelled by the tasty but risky obligation of curiosity among companion species, once we know, we cannot not know. If we know well, searching with fingery eyes, we care. That is how responsibility grows. (p. 287)

She does this mostly by telling stories. And she’s a good story teller. Her best stories are about scientists who use animals for research purposes. She argues that the quality of the research depends on respecting the ethical obligation humans have to animals.

In McConnell’s book she describes how she wasn’t allowed to give toys to the lab dogs when she was in university because the emphasis then was on keeping the lab “sterile.” (She snuck in toys anyway. I like McConnell.) But my owner says that it’s a mistake to conflate ethical positions like this with instrumental arguments about scientific outcomes because it isn’t necessarily true that scientifically valid outcomes are dependent on ethical behavior.

Haraway reserves her deepest scorn for the field of bioethics. She emphasizes the importance of social processes and the process of becoming – hence her use of stories to make her points. I like her stories, but my owner thinks that the stories allow her to avoid doing the philosophical dirty work of formulating a coherent argument.

I don’t know. I think he read this book hoping to learn something about dogs, when its really a book about humans. I learned a lot about humans from this book. The part about how activists are pressuring dog breeders to be more open about genetic data was really interesting. It’s a whole different world from the Taiwanese puppy farm where my first owner bought me. My current owner took me there once and seemed very upset when we left. I was just happy to see my mother, even though she barked at me.

I’d like to learn more about dogs and anthropologists. I hope my owner finds time to read Kohn’s article “How dogs dream” or Ghodsee’s Anthropology News piece “Basset Hounds in the Balkans.” Maybe you have some stories or references you’d like to share?

(You can see a webcast of a talk Haraway gave about her book at The Open University.)

4 thoughts on “When Species Meet”