Something Else to Say About the Olympics:  Slate published a very good piece on a dark chapter of Olympic and anthropological history.  The 1904 Olympics in St. Louis, which ran concurrently with the World’s Fair, also hosted a “Special Olympics,” which featured ‘savages’ from the anthropology exhibit competing in parallel sporting events.  Nevertheless,

“The Special Olympics were harder to pull together than they expected. Despite the fact that the folks in the human zoo were in quasi-captivity, they were paid professionals. With agents and everything. Very few of the “primitives” had any interest in participating in an amateur competition.”

In an interesting combination of queer rights and indigenous sovereignty, the Coquille Nation in the Pacific Northwest of the U.S. has legalized same-sex marriage (and presumably the marriage of two-spirit identified individuals?).  The right to marry will extend to anyone who marries a member of the Coquille.  Lorenz at anthropologi.info has the story.

Opening Amazonia:  Bloomberg.com carried this piece on Amazonian indigineous activists struggling to prevent Brazilian mining companies from speculating on their land.  But some legislators in Brasilia are considering inviting companies to prevent even more damage from illegal diggers who are not regulated by the state.  (Thanks to Joanna Kirkpatrick for sending this in.)

Anthropologists, Visit Taiwan!  This article in the Taiwan Journal interviewed a couple generations of American scholars of Taiwan.  It has some interesting insights about changing politics and practices of fieldwork over time in one place.

Nationalizing Patrimony:  The U.S. Federal Government is thinking about stepping in and taking over day to day operations of the Cahokia Mounds, the archaeological site for the indigenous community north of Mexico.  The site is currently operated by the state of Illinois, but floundering state budgets have made it hard for the local government to upkeep the site.

The Daily Telegraph (UK) engaged in a little “business anthropology” to find out more about the exploding Indian middle class.  Their findings?

The Vas’s flat is tiny compared to the house of a British middle class family of four. There is a modestly sized living room, kitchen, one bedroom and a bathroom. As is common in India the Vas’s children, six-year-old Anaita and four-year-old Alden, share their parents’ bed – an arrangement which usually lasts until the children are at least ten…

In the corner of the room sits a flashy Samsung high definition television. I am given cola to drink. Embracing non-Indian goods is not a problem for this middle class family.

Perils of Racial Paranoia: The Philadelphia Inquirer interviewed John L. Jackson about comedy, Barack Obama, and the racial state of the (U.S.) nation. 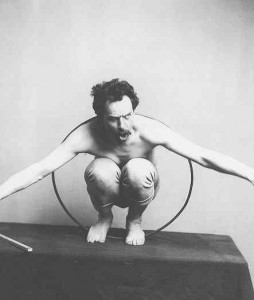 5 thoughts on “Around the Web”