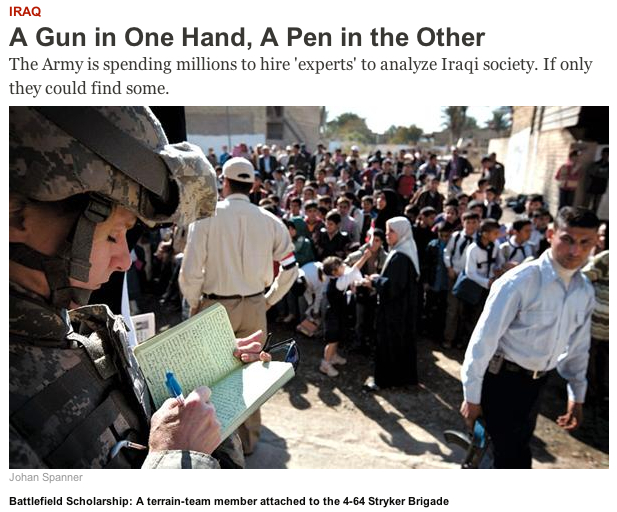 The Human Terrain program… is still in its infancy and has attendant growing pains. But early results indicate that it is leading to alternative thinking – coming up with job-training programs for widows, or inviting local powerbrokers to bless a mosque restored with coalition funds. These kinds of actions are the key to long-term success, but they are not always intuitive in a military establishment that has long put a premium on firepower and technology.

This week, Newsweek reports on some of those growing pains:

{HTS} Recruitment appears to have been mishandled from the start, with administrators offering positions to even marginally qualified applicants. The pool of academics across the country who speak Arabic and focus on Iraq, or even more broadly on the Middle East, is not large to begin with. Some of the best potential candidates probably grew leery of the program when the American Anthropological Association declared participants would most likely be violating the ethics tenets of their profession if they signed up (because they would be contributing data that could be used in military operations). Several team members say they were accepted after brief phone interviews and that their language skills were never tested. As a result, instead of top regional experts, the anthropologists sent to Iraq include a Latin America specialist and an authority on Native Americans. One is writing his Ph.D. dissertation on America’s goth, punk and rave subcultures.

Following Oneman’s post on Minerva, this story sketches scenarios that call into question the freedom of inquiry that anthropologists working with HTS might be able to attain. Note in particular the story of Zenia Helbig. (See also.) Irony might be too soft a term for a situation in which the very expertise that is needed by the military (e.g., in local languages) is thought to reveal one’s suspect loyalties. I noticed several themes in the Newsweek story that were prefigured in our discussions of HTS at SM, notably the high salaries offered to the HTS anthropologists, the basic lack of local knowledge on the part of those hired, and so on. Steve Fondacaro is quoted:

But Fondacaro, whose program recently received an additional $120 million in funding {!!}, does not necessarily believe it was wrong to send over anthropologists with no background in the region. “Research methodologies are universal,” he says. Interpreters help fill in the gaps. That he clings to this concept raises concern among people who want the program to succeed, including Thomas Johnson, an Afghan expert at the Naval Postgraduate School in Monterey, Calif. Johnson served in Afghanistan on a pilot Human Terrain team last year. A Pashto speaker, he spent much of his time there interviewing Afghans in their homes. “If you don’t have a good knowledge of the actual country and language, all the methodology can go for naught,” he says. Johnson was shocked to hear Human Terrain had received a huge funding increase while other military programs face cuts. He says it shows just how much faith Pentagon planners have in the idea that real experts can help America win the war in Iraq. If only someone would make the effort to find them.

AAA responds to Newsweek in rather convoluted and unclear fashion here.

7 thoughts on “HTS in Newsweek”