I think we’ve got the comments issue fixed…seems mine were going to the spam filter, to many links in them I think.

Back to the intervention. As Jangari mentioned in a comment below there was a great Four Corners program on yesterday, you can watch the entire program or extended interviews online here.

Once the “emergency” was declared Northern Territory Aboriginal communities the Howard/Brough team set out their plan for action. The ‘intervention’ was given a mission: “stabilize, normalize, exit,” a “team of experts” (list here) and an operational commander: Major General Dave Chalmers. The military language continued as they announced a “boots on the ground strategy,” “command operations” and “strategic plans” and an “embedded” national media presence.

Major General Chalmers assignment is to act as the operational leader. There haven’t been machine guns, IEDs or tanks and the soldiers have playing footy with the kids pretty regularly. This is not Iraq. There is a joke circulating in Australia that Australia is the first member of the “Coalition of the willing” to invade itself (remember Australia was one of the first and remaining supporters of Bush and the war on terror). In Willowra, this sign greeted intervention teams: 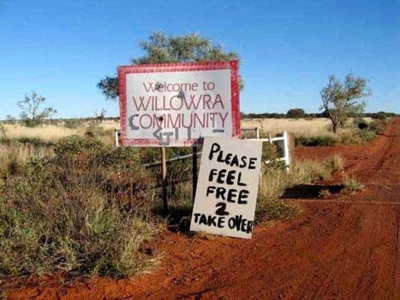 Over the first six weeks of the intervention as the command team was moving from community to community a pattern started to emerge. The team would go in, often unannounced or with only a few hours notice. They would convene meetings in which intervention team personnel would often read from pre-written scripts about the changes ahead. The changes (which are part of the bundle of legislation passed on August 17, 2007, a good summary, here) included:

The intervention in action:
Step One: Bring in military and police to “survey” communities to document the problem areas (forget that this documentation already exists in most cases). By all accounts the police and military personnel have served a very limited purpose: they mostly hung around, gave kids candy and watched while the bureaucrats spoke with the communities. Some have helped put up temporary buildings (for the bureaucrats to sleep in). It’s not clear what the military role was in the first place–other than to perhaps give the plan the necessary look of an emergency.

Step 2: Get health teams in to do mandatory health checks on children. Since the intervention was premised on the abuse–particular sexual abuse– of children the Brough/Howard plan called for health screenings. Once doctors weighed in that mandatory exams would themselves constituted abuse, Brough backed off and said the health checks were optional. As I mentioned last time the health checks have been less than impressive with the doctors admitting that they aren’t finding any new health problems. In September I was talking with a health professional that works in Elliot, just north of Tennant Creek. She said when the intervention team rolled in they had to continually ask the two Aboriginal health workers questions about the children they were evaluating. The health workers and their regular doctor do regular checks on all children already and have documented the health problems—ears, mainly—that already exist. The team who flew in at some expense re-documented what was already known (these types of stories are the norm). There have been approx. 2000 health screenings thus far (for more see this article)

Step 3: Bring in the “transition teams” to let people know that their ½ their Centrelink pay will be quarantined and if they are working on CDEP (community development employment projects)—sorry, you’ll know be on work-for-the-dole and the Department of Employment and Workplace Relations (DEWR) will tell you what your new job is—it usually has to do with picking up rubbish (the Centrelink and DEWR folks who came to Tennant Creek said as much–oh but the artists who are now out of jobs could also “paint rain water tanks, they said). And, people will also be given courses on how to “manage” their (now lower) incomes. (the Four Corners episode does a good job of showing the implications of this–see above link).

With little in the way of details these meetings tended to be confusing for everyone. In Tennant Creek when the Centrelink folks came to town they refused to answer question off their script and said they were not allowed to give out printed versions of their PowerPoint presentations. Living Black, a national television show, did a great job of getting out to communities and talking with people after and during many of these meetings (you can watch the archived programs on their website).

Scrapping CDEP has been a major issue. With some 8,000 people WORKING on CDEP (this is not passive welfare as it has been portrayed) and the offer of only 2,000 “real jobs” by the Commonwealth, some 6,000 Aboriginal people are set to become unemployed. In communities people wonder how they will get along? How will they continue to live in small communities or on outstations without this avenue for employment? Another question on everyone’s lips was: how will taking over our land, scrapping our permit system and cutting off our livelihoods make our kids more safe? No one has yet to answer these questions. In fact, even many who support the intervention–Aboriginal leaders such as Noel Pearson, Alison Anderson and Marcia Langton–question the logic of those provisions in relation to the overall need to “stabilize” communities. (Labor says if they win the election they will reinstated a reformed CDEP.)

Over the last few months as the intervention team has moved from community to community it has met with people who are angry, confused at the new policies, and bitter over the way in which this new plan has been carried out. Yuendumu residents have been vocal in their disdain for the plan. The community from Maningrida just filed a lawsuitthe first to challenge the legality of the legislation in relation to compulsory leases and the abolishment of the permit system. Art centres throughout the NT have banned together to form a national group to fight the scrapping of CDEP. Tennant Creek the artists at Julalikari Women’s Art Centre have made national headlines fighting to keep CDEP. The list goes on.

Major General Chalmers has consistently stated that the operation is productive and that they are implementing the necessary plans. Here’s one operational gem. Since 1/2 of people’s Centrelink incomes will be quarantined, they will have to get a debit card that allows them to spend their money only at certain stores: Coles, Woolworth’s and K-Mart. Community stores must apply to be added to the list of licensed stores eligible to accept the Centrelink payment cards. For the first phase of testing in 4 small communities, Centrelink has set up a caravan in the parking lot of the Alice Springs hospital where people must go to activate their cards and designate where they want to spend their money. So people must 1) find a way to get to Alice Springs from communities up to several hundreds of kilometers away 2) stand in line in the parking lot 3) decide then and there where they will spend their money for the next two weeks 4) if they change their minds, no problem, they can just get back in line and reallocate where they want to spend their money. This is what military planning has produced so far–limited health checks with no new medical information, confusion over community employment and basic services, and law suits challenging the compulsory leases.

Brough and Howard’s militarization of the intervention was necessary to produce the appearance of an emergency that needed a swift response. It has not, however, produced compliant subjects. The second phase of the plan, to “normalize” communities, is meant to get underway over the next year (if Howard is re-elected at the end of November, if not just what a Labor government will do is unclear). There have been calls over the last two weeks for Chalmers to step down as commander now that the initial phase is over–having a military commander preside over Aboriginal communities for too long might give Australia’s allies the wrong picture about their national stability. So far, he’s not going anywhere. If he stays and moves into the normalization phase what will that look like? The Major General checking to make sure work-for-the-dole participants pick up rubbish? Escorting children to school? Teaching people how to “manage their incomes” so they can be homeowners? Is this a new military exercise or is this comparable to more recent “liberation” campaigns?

In my next post I’ll discuss the role of anthropologists in the intervention and its aftermath.

3 thoughts on “Stabilize, Normalize, Exit…it has a nice ring to it”