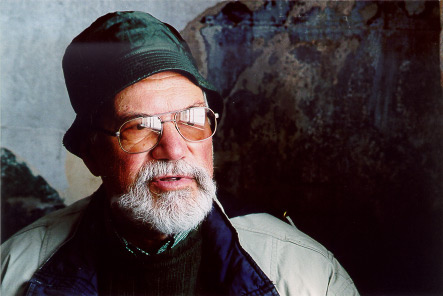 [Asen Balikci in, Through These Eyes, by Charles Laird.]

In the December issue of American Anthropologist Jay Ruby reviews Charles Laird’s 2003 film: Through These Eyes, a film which interestingly seems to locate the origins of the current culture war in the Cold War era:

At the onset of the space race in the 1960s, the U.S. government feared its educational system was slipping behind the Soviet Union’s. A controversial science initiative grew out of its response, Man: A Course of Study [MACOS], a program with the ambitious goal of teaching American children what it was to be human. At the program’s core was a benchmark of visual anthropology, the Netsilik Film Series, capturing a year in the life of a small Inuit community on the cusp of contact.

In Jay Ruby’s review [not yet available online] he writes:

If there was an overriding purpose to MACOS it was to make students aware of their racism and ethnocentrism. The initial results of the course were encouraging. Students loved it and seemed to learn a lot. At least one student, Kerim Friedman, became interested in anthropology as a result of the course. He recently finished his Ph.D. dissertation at Temple University. At its peak, the MACOS curriculum was taught in 47 states, in 1,700 schools, and to over 400,000 students. Unfortunately, the culturally relative point of view of the course, that is, the basic assumption that different cultures find different ways to solve basic human problems, also appeared to seriously challenge some basic assumptions that some parents and some congresspersons had about the goal of education. The ensuing controversy caused MACOS to be dropped from almost all school systems.

It is true that, as I told Jay, my school still used MACOS when I was in fifth grade, at which time I saw Asen Balikci’s famous Netsilik Eskimo films. But Asen Balikci’s influence on my life actually began much earlier, from the time when he was in Afghanistan filming The Sons of Haji Omar with Tim and Patsy Asch. He got deathly ill from food poisoning and was carried home to our house by my father. I was just an infant at the time, but my parents assume I caught the anthropology bug at that early date. More recently, my dad was doing work in Bulgaria, where he had a chance to resume contact with Asen Balikci … and so, to make a long story short, that’s how it happened that Asen forwarded Jay Ruby’s article to my dad and ended up agreeing to an e-mail interview for Savage Minds!

Before proceeding with the interview, I wanted to provide a little more background regarding the conflict over MACOS from Jay Ruby’s article:

As Through These Eyes shows, some parents and later some conservative congresspersons like John Conlan (R-AZ) saw MACOS as being subversive to the traditional values of the United States and, hence, dangerous to the perpetuation of the American way of life. As Representative Conlan claimed in the film, MACOS “brainwashes children with a dishonest view of man” and “creates a new culture devoid of traditional values” and that the Netsilik were “too primitive to be an example.” Religious conservatives like Pat Robertson joined in the fray. On the Christian Broadcasting Network’s website, in an article entitled “Pat Robertson Answers Life’s Most Challenging Questions,” Robertson states,

The state is attempting to assert control over the thought life of children. For instance, the federal government published a course called MACOS, “Man, a Course of Study,” that attempted to indoctrinate young children into the teachings of humanism. The federal and state governments also have been at the forefront of liberal experimentations with amoral sex education. Humanist values are being taught in the schools through such methods as “values clarification.” All of these things constitute an attempt to wean children away from biblical Christianity. [Christian Broadcasting Network 2001]

By the mid-1970s the opponents both in and out of Congress had sufficient clout to force Congress to stop funding all educational reform. MACOS stopped being used by most school districts and soon disappeared completely.

Kerim Friedman: How did you come to be involved with the MACOS program?

Asen Balikci: The steering committee for MACOS was established in 1963 under the direction of C. Oliver, head of anthro at Harvard. They wanted to start with a unit on the Eskimo for grade 1. And only the Eskimo as an amiable kindergarten culture. At the time I had just finished writing my dissertation on the Netsilik for Columbia. Prof. Arensberg informed Oliver about my work at the 1962 AAA meetings. And Oliver called me right away, at the same meetings. Oliver told me they wanted ethnographic film with no subtitles and no English commentary, further, they wanted traditional, classic Central Eskimo culture. And that is what they got.

KF: My father related to me a story about your crew freezing in their igloo while filming the Inuit. What actually happened?

AB: The crew freezing…yes, as you can imaging it was very cold! The first cameraman developed a strange sickness in the fall, when it started getting cold, he couldn’t breath easily in a windy environment. He had to be evacuated. The second cameraman, about 40 years old, lasted only a week, he collapsed and couldn’t walk any longer. He thought! he would be sitting on a dogsled when moving camp, instead, when we reached rough ice he had to pull the sled together with the dogs! The third cameraman, Ken Poste, adapted very well, he never complained, we worked together about nine months in all kinds of weather…Bob Young at the end stayed for a month in the spring, there was snow all around but it was not terribly cold and there was plenty of sunshine!

[The version of the story my father recalls is even more colorful: Supposedly the crew were all living in igloos and kept complaining of the cold. They assumed they would get used to it, since the Inuits were able to live in igloos without being bothered by the cold. When they became friendly enough that one of the Inuits came and visited them in their igloo, one of the first things he said was (something like): “Damn, its cold in here!”

They soon showed the crew how to build an igloo properly. My father likes to point out that it was Asen’s same insistence on trying to follow local customs that got him food poisoning in Afghanistan.]

KF: Were you involved in developing the curricular materials that were created to go along with the film? What were the pedagogical goals of the program?

AB: I was involved in the development of the curriculum from the beginning to the end. I provided the ethnographic material and had to closely supervise its inclusion in the program. That was a very difficult task: working with the curriculum development unit, with the teachers, I had to teach grade school myself, evaluate and criticize the various materials like booklets, games, posters, etc. Our aim was to introduce cultural relativism in the schools…that was the general aim that no one defined clearly, they were afraid…

KF: What do you think was the greatest strength of MACOS?

AB: The greatest strength of MACOS…the films obviously! I mean the special kind of films! Also the inclusion of the research scientist in curriculum creation! Also the teacher’s changing status, he has become a helper of the student! And getting rid of the textbook and inviting the student to learn directly from field notes!

KF: I remember, when I took MACOS, that we studied films of Baboon society together with films of fourth-world peoples. I didn’t think that this was odd until I thought back on it many years later. Did this cause any controversy at the time?

AB: The introduction of animals did not cause any controversy at the time…with the unit on animals we wanted to teach basic concepts like structure and function…the Netsilik Eskimo were the only ethnographic case included in MACOS…we experimented with the Bushmen at the time and decided against [it] …the Eskimo … created no racial-ideological problems [because they were perceived as white].

KF: If you had the resources to construct a primary school curriculum around documentary/ethnographic films today, how would you do it differently? Are there any existing models you are aware of which you like?

AB: There should be many curriculum units today using audiovisuals to illustrate multiculturalism. Unfortunately I’m not informed. Such curricula are developed mainly in the US, there is practically nothing in Europe. The Europeans want very much to learn about such programs and try them in school. Often they confuse our anthropological approach with history, mainly European history. I don’t think anything approaching the standards set by MACOS has ever been produced.

KF: What are you working on now?

AB: Now I’m doing nothing, I contributed to the production of 8 films in the Old World, a couple of them are interesting, Bulgarian muslims, gypsies, poor elderly people (culture of poverty), I don’t teach, mainly because there is no anthropology in Bulgaria, only local folklore. I spend winters in Sikkim (Eastern Himalayas) with my daughter [Anna Balikci Denjongpa] who is also an anthropologist. We train locals in ethnographic film making and help them make films. The first film we made was shown earlier this month in Oxford.

KF: Thank you for taking the time to answer these questions. Is there anything you’d like to add?

AB: The most important thing I discovered in MACOS was the ideological effect of the Netsilik films, they became effective tools in the struggle against racism and organized violence. There is an unpublished paper by [Peter] Biella on the ideological importance of ethnographic film!