Below is our last post this time around. It’s been engaging and productive meeting many of you in blogland. Cheers from Fred and Deborah

The anthropological view of history we present in Yali’s Question is crucially unlike Diamond’s in its emphasis on what needs to be taken into account. Diamond, less by default than by design, denies significance to cultural differences — to particular, historically located visions of the desirable and the feasible. The dissimilarity in our approaches is clarified by what we make of Diamond’s book cover. This cover reproduces a large oil painting by John Everett Millais (1845) entitled “Pizarro seizing the Inca of Peru.” 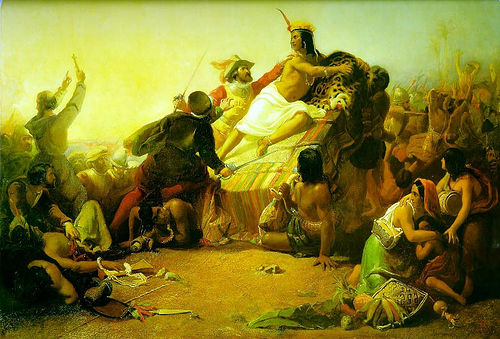 The painting, hanging in London’s Victoria and Albert Museum, is part of a collection (begun in 1852) representing the various, often diverse, aesthetic currents of the Victorian age. In the center, Pizarro, sword in hand, is seizing a darkly handsome, grandly exotic Inca leader from his partially overturned palanquin. On the left are massed Spanish soldiers with a priest holding up a cross for their inspiration. In the right foreground, two Peruvian women and a child are clutching each other in fear. In the right somewhat blurred and darker background, Spanish soldiers are putting Peruvians to the sword. The painting (perhaps anticipating Millais’s later anti-Catholic work) seems directly critical of Spanish conquest. Certainly, this is the perspective of Joseph Kestner, who describes the picture (in the Journal of Pre-Raphaelite Studies) as an “anti-Imperialist canvas during a decade of British expansionism and colonial defense” (1995: 55).

When we look at this painting and think about the place in which it hangs, we reflect on a particular and complex history — on the range of sensibilities and political perspectives that existed within this age dominated by capitalism and empire. However, when we look at this painting as it appears on the cover of Diamond’s book, we find it interesting because of the extent to which it is decontextualized, and we think, misunderstood. Rather than a historically located castigation of Spanish imperialism, it is offered as a synopsis of human history in general — a history of morally neutral conquest through the use of techniques and technologies of physical domination. In other words, from our anthropological perspective, we see Millais’s vision, itself critical of the dominant expansionist perspective of his age, transformed into a model that justifies as well as universalizes expansionism: one used to explain what happened to “everybody for the last 13,000 years” (1997: 9). Such a transformation of Millais’s critique of imperialism strikes us as consistent with Diamond’s position about the irrelevance of cultural and historical contexts in understanding what people do. Indeed, given Diamond’s view of history, the conquest that he (rather mechanistically) entitles “Collision at Cajamarca” (1997: 67), was inevitable. From his perspective, if it wasn’t Pizarro who had seized the Inca of Peru, it would have been some other European at some time.

Interestingly, in Kestner’s discussion of Millais’s painting, he quotes Bartolome de Las Casas, whose Short Account of the Destruction of the Indies (1552) was a primary source of information concerning the incident depicted in it. De Las Casas, citing eye-witnesses and writing only two decades after the event, conveys the massacre as remarkably cruel and entirely unjustified. From his contemporary Spanish perspective, Pizarro was, even by the standards of the time, a “great villain” whose “cruelty came to outstrip even that of his predecessors…. His wickedness was on such a scale that nobody will ever really learn the full extent of it until all is revealed on the Day of Judgment” (as quoted by Kestner, 1995: 54).

We do not think that Diamond, given his history of grand inevitability, would be much interested in such alternative voices as de Las Casas’s. From his perspective, there is little value in extended conversation to probe the perspectives of anyone. Certainly, the voices of those like Yali would scarcely register: their concerns and sense of injustice would not be heard, their claims to moral worth would not be recognized. Moreover, in the absence of such conversations, voices would be eliminated that might challenge and contextualize our own more familiar ones. And this would come about, in our view, not just as a function of the scale on which history was written — not just as a function of an interest in broad patterns.
***

How, then, might we respond to Yali’s question? Why did white people deny equality and full humanity to black people? Our full response would be more proximate, more complex, and more messy than Diamond’s. It would consider, as essential background, the rhetorics, practices, contingencies, and exigencies of 19th and 20th century global expansionism. Such a consideration would involve, among other matters, the often contesting perspectives concerning how human beings might legitimately derive profit through the use of others, at home and abroad: whether used as slaves, indentured laborers, piece workers, or wage earners. It would also consider, as we have done in our book about one PNG sugar plantation, the often contesting perspectives concerning what might be done for Yali and others to achieve worth in an independent PNG. Although our book is only a partial answer to Yali’s question, and one addressed more to the several generations that have followed Yali than to Yali himself, it is, we think, an example of the form any answer should take. It is the kind of answer that anthropologists (and many historians) do provide in its willingness to listen seriously to others and scrutinize their own taken-for-granted understandings.

It is the kind of answer that reveals the differences between the necessary and sufficient causes of historical phenomena — that insists that people who have the power to dominate others in faraway places do not automatically find it desirable to do so. It is the kind of answer that shows colonial expansionism and domination to be the product of the historical and cultural circumstances of capitalism, rather than the product of the inevitable workings of human nature. Moreover, it is the kind of answer that shows capitalism (as well as expansionism and domination) as often justified through narratives about human nature — narratives like Diamond’s of the seemingly inexorable.
This kind of answer would also be appropriate to the question of what Yali and the other PNGuineans might do if they were long the ones with significant power — if various historical shoes had been, as it were, on other feet. In fact, we are often asked by students whether Yali, with such as guns, germs, and steel on his side, would have acted as a Pizarro. Our response must be that it all depends on what conditions — on what contexts — are assumed. If Yali was the product of the sort of history that produced the concentrations of power that made Pizarro’s conquest feasible, Yali would not be Yali. Under such conditions, he might be Pizarro — or he might be de Las Casas. On the other hand, if Yali and the other PNGuineans who feature in our story were the products of the history they actually had, we venture that (at the very least) they would be reluctant to leave kin for lives of reckless and ruthless conquest on behalf of the likes of God, King, and gold. Their preferred world, while doubtless still of assertiveness and contention, would, we think, be one of maximized entailments rather than of maximized annihilations.

It is, as we have said, that people not only make war, but also make peace; they not only employ techniques and technologies, but also think about how these should, or should not, be used. And they not only pursue outcomes, but also evaluate outcomes. To understand all of this — to understand how history happens — requires attentive listening. It requires conversations that probe and interrogate the range of perspectives held by culturally and historically located actors, ourselves included.

28 thoughts on “Pizarro, Millais, Diamond, and Yali: Our Last Waltz”