During the Revolution of Dignity in Ukraine, protestors streamed into the residence of former President Yanukovich at Mezhyhirya reclaimed it. The hat thief who became Head of State is charged with squandering billions of dollars during his years as President. Ukrainians are still asking how to repair the political culture that made it possible to elect this man.

The Yanukovich estate has been turned into a “Museum of Corruption.” Vans with the “Museum of Corruption” placards fill with passengers on the outskirts of Kyiv about every twenty minutes and careen to the estate where visitors can gawk and repent. Like the Museum of Terror in Budapest that explores fascist and communist terror in Hungary, Yanukovich’s estate exposes the idiocies of modern leadership through bizarre inversions. This is a place where animals lived better than many Ukrainians. Museums of corruption may become a thing of the future: one opened in Thailand in June 2015.

Tourists can leave Ukraine’s Museum of Corruption with souvenirs like refrigerator magnets in the shape of a golden toilet (Yankovich reportedly had golden toilet fixtures) or toilet paper printed with the face of the latest political bad boy. 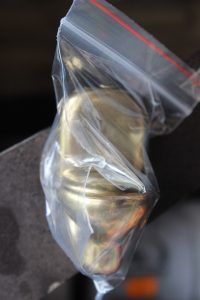 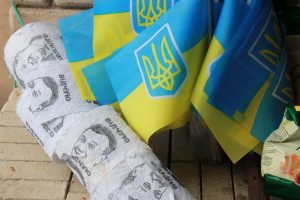 A paradoxical layer here is the humanitarian purpose his estate now serves. People who have been displaced by the war in eastern Ukraine and the occupation of Crimea were granted permission to live here. Yes. This is a good thing, sort of. After the Ukrainian state proved powerless to defend them, persons displaced from both occupied territories came to live in the servants’ quarters on this grand estate. The direct, physical juxtaposition of great wealth and tremendous misfortune are a microcosm of Ukraine’s struggle to deal with the extended catastrophe of war and corruption.

I spent time at Mezhyhirya with IDPs who now live here. The building is immaculate, but extremely frugal, like a low security prison or student dormitory. In their front yard, however, internally displaced people have a lavish playground of excess. If they can stomach peering into the gapping socio-economic divide between themselves and the fabulously rich, they can ride in golf carts over smooth blacktop trails that stretch for miles, squint at elaborate fixtures in the one-man steam room, or stroll through exquisitely manicured gardens with patriotic topiary.

However grand or lush the surroundings, at the end of the day IDPs return to the servants’ quarters, a potent reminder of the magnitude of what they lost: in addition to family members and pets that were not able to come with them, IDPs had to leave homes, cars, and even their bank accounts behind. Blocking bank accounts in Crimea was one of the first steps taken by the Ukrainian state after Russian annexation. Housing in the servants’ quarters is therefore symbolic of IDPs’ place in Ukraine.

It is possible to see how some of the features on Yanukovich’s estate would fit well in a sequel to the film Charlie and the Chocolate Factory. Paralleling the story of Ukraine where people enter politics and eventually find themselves sucked into corruption, Wonka tempts each of the children on the factory tour with something related to their individual character flaws. Each of them, except for Charlie of course, succumbs to the temptations. Just as Wonka searched for an honest child to whom he could entrust his candy making secrets, Ukrainians search for leadership that won’t pocket tax revenue.

And we mustn’t forget Wonka’s beloved factory-working friends, the Oompa-Loompas, whom he rescued from “Loompaland,” a dangerous, violent, and terrible country where he thought they would surely fall victim to genocide. In this parable of excess, the Yanokovich estate stands in for the wondrous candy factory, and IDPs the Oompa-Loompas.

Churches, hospitals, low budget hotels, and student dormitories have all been repurposed to take in a fraction of Ukraine’s estimated 1.7 million displaced. http://www.internal-displacement.org/europe-the-caucasus-and-central-asia/ukraine/new-archive/displacement-figures-in-ukraine-fail-to-reflect-a-complex-reality But these accommodations typically must be paid for. Having lost their homes, their savings, and some of their voting privileges, IDPs are given a token allowance to offset the cost of rebuilding their lives. IDPs are eligible to receive 440 hryvnia, (880 for invalids, pensioners, and children) when the average monthly salary is between 5,000 and 6,000 hryvnia. These benefits are so low that many IDPs say it is not worth their time to sign up.

Another surreal twist: one can only collect these benefits while working. After a month without work, the benefits are cut in half, and after two months they are discontinued completely. I asked officials in the Ministry of Social Policy and the Ministry for the Temporarily Occupied Territory to help me understand the logic whereby those most in need are helped the least. Both officials told me that the payments are intended to be work incentives.

My guide at Mezhyhirya in Novi Petrivtsi does not know how long she will be able to stay. Willy Wonka could have been describing the humanitarian crisis in Ukraine when he uttered the famous line: “There is no earthly way of knowing where we are going.”

5 thoughts on “The Museum of Corruption”