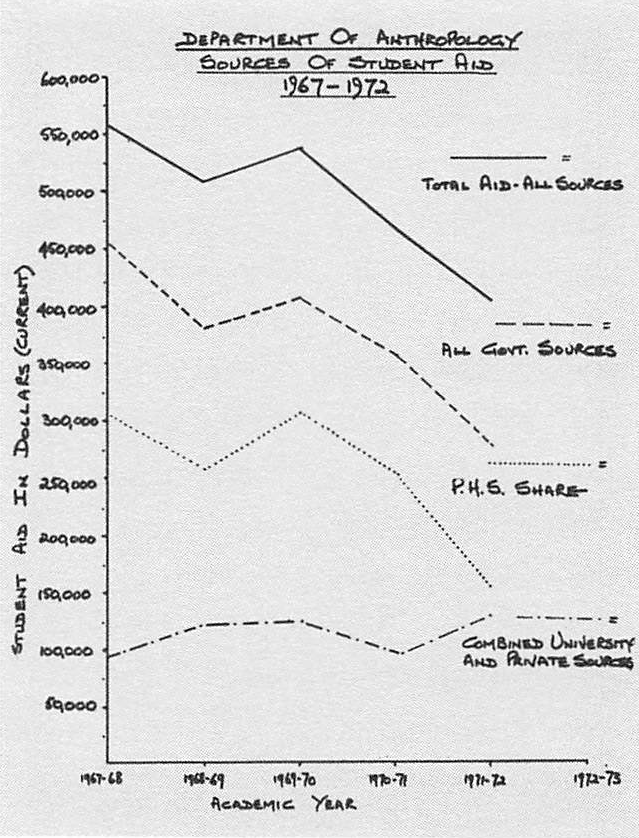 There was a time when graduate school didn’t suck that much, financially speaking at least. And then it did start sucking. What was the time before like — and where did it go?

The chart above is from George Stocking’s history of the University of Chicago anthropology department, Anthropology at Chicago, published in 1979. We can see that things started going downhill pretty seriously just after the 1967-1968 school year.

In the fifty years between 1929 and 1979 (when Stocking’s essay was written) the department produced 346 Ph.D.s (p. 49). In the late 1960s and early 1970s, Chicago had around 120 graduate students at any one time (p. 46). There were about 24 professors in the department in 1968 (judging from the figure on p. 42 of Stocking’s book), which meant around 5 graduate students were being advised by one professor at any one time — although I’m sure that in reality some professors had a heavier advising load than others.

The chart above shows that In the 1967-1968 year, roughly US$550,000 was spent on student aid, or roughly US$4,583 per student (again, don’t take these ballpark estimates very seriously). Measuring the value of 1968 dollars is tricky, but roughly we can say that the department funneled the equivalent of US$4,000,000 in 2014 dollars to students. Or, to put it roughly, US$33,000 per student per year. I have no idea what they spent it on or how much that thing cost. I don’t know how the funds were divvied up. I’m not an economist, so if someone can correct or improve this guestimation of the spending on graduate students, let me know. But it looks like back then, graduate school didn’t suck that much.

Louis Menand (in Marketplace of Ideas, p. 64-65) has called the period from 1945 to 1975 the “Golden Age” of higher education in the United States. The baby boom, economic growth, and Cold War education spending resulted in gigantor levels of academic growth. Menand writes:

Between 1945 and 1975, the number of American undergraduates increased by almost 500 percent and the number of graduate students increased by nearly 900 percent… In the sixties alone, undergraduate enrollments more than doubled… the number of doctorates awarded every year tripled; and more faculty were hired than had been hired in the entire 325 years of American higher education prior to 1960. At the height of the expansion, between 1965 and 1972, new community college campuses were opening in the United States at the rate of one every week.

“the number of doctorates awarded every year tripled.” Think about that for a second. That is crazy.

1968 was an important year for American popular culture, half day-glo love-in and half body bags returning from Vietnam. It was an important time in anthropology. Roy Rappaport and Marilyn Strathern had just gotten their Ph.D.s. Paul Rabinow was just writing up. Michelle and Renato Rosaldo were in the Philippines doing fieldwork. Marvin Harris had published The Rise of Anthropological Theory, and Pigs for the Ancestors had come out. Kathleen Gough was read the first version of her famous “Anthropology and Imperialism” paper at the Southwestern States Anthropological Association meeting the year before — the same year Victor Turner published Forest of Symbols. Katherine Dunham’s Island Possessed would come out a year afterwards, as would Islam Observed and the first English translation of Lévi-Strauss’s Mythologiques. The AAA had taken a stance against the Vietnam war, and a new anthropology department was being founded at UC San Diego.

As the chart above shows, most of the money for graduate students didn’t come from the university’s endowment. It came from federal funding which was funneled through the university. A major chunk of the was a Public Health Service training grant (the P.H.S. line in the chart). Starting in 1968, federal funding was slowly but steadily pulled back from Chicago and elsewhere. The PHS was not renewed (as far as I can tell, it wasn’t actually being used to train people for service in Public Health. Other major sources were National Institute for Mental Health (NIMH), NDEA language fellowships, Fulbright awards, and funds from the American Institute of Indian Studies (Stocking, p. 46). The department — then chaired by David Schneider — began to feel the bite.

Over the past year it has taken more work and time to place our students in decreasingly attractive jobs, often in institutions in which they may be overly trained to be effective in the kind of teaching which they are expected to do, hence leading to high levels of frustration on their part and friction in these institutions. Until this year, the ob shortage has not been absolute but relative. This year, however, not one of our students looking for a job has been placed yet.

Yet, as Smith noted, despite decreased job prospects and decreased funding, the department “continue[d] to admit the same number of students.”

Today, we feel these pains more acutely than ever. American academics are, in essence, in an academy which has been slowly been decreasing in size like the trash compactor room in Star Wars. One of the limits on contraction has been the tenure granted to baby boomer academics who got jobs prior to, say, 1976. Their job security meant that departments would be fully staffed. But there were downsides as well: They continued to overproduce graduate students (for various reasons we can talk about). Today, as they are replaced with casual workers, the trash compactor doors move ever closer, and there is no R2D2 on our com link who can order them to stop.

Nevertheless, this period — the period that emeritus faculty remember — informs our imagination of what graduate school and graduate funding should be like. These unsustainable good old days (which were tied to America’s rise as a world power, btw) are the back drop against which we measure our current situation. On the one hand, this is a great thing, because it provides a historical referent for our legitimate aspiration that people should not have to indebt themselves up to the eyeballs in order to get a degree, and should be able to have decent jobs where they get an honest wage for an honest day’s work. On the other hand, as we pursue fairness in education and the marketplace, we need to be aware of where our expectations come from and why the past had the structure it did. We do not want graduate school to suck in the future. But in order to create a world where it doesn’t, we need to understand where, when, and how graduate school did (and didn’t) suck in the past.