Savage Minds welcomes guest blogger Pablo Figueroa. Pablo is an assistant professor in the Center for International Education at Waseda University in Tokyo. In this position, he teaches courses on globalization, leadership, and disasters. His anthropological research is centered on risk communication, citizen participation, and cultural representations of the Fukushima nuclear catastrophe. His most recent publications are two book chapters, Subversion and Nostalgia in Art Photography of the Fukushima Disaster and Nuclear Risk Governance and the Fukushima Triple Disasters: Lessons Unlearned, both forthcoming in 2016.

All images copyright by Pablo Figueroa.

Inside the Fukushima Exclusion Zone: Place and Memory after Disaster

FROM BEHIND THE WINDSHIELD of the moving car the landscape looks exuberant, unpolluted. Warm morning sunlight bathes the forest to the side of Tomioka highway, a 69 km stretch of pavement also known as National Road 114 that connects Fukushima with the town of Namie. It’s a Sunday morning and few people can be seen. The feeling of emptiness is vast and real. From time to time, large plastic bags appear along the road, neatly stacked one on top of the other. The orderly layout obliterates a much more messy reality: The bags contain highly radioactive soil that was removed from villages and fields during the so-called “cleanup efforts” following the Fukushima nuclear disaster. Their final destination undecided, the ominous recipients are a painful reminder of what happens when trying to decontaminate the environment after a nuclear catastrophe. You can scrape topsoil and wash the surface with pressure hoses as much as you like but Cesium-137, which has a half-life of 30 years, will keep coming down from hills along with other radioactive isotopes, carried by rain and wind, dispersing in manifold and uncontrollable ways.

I have been to this part of Japan for ethnographic fieldwork before, but never to Namie Town. In April 2011, the government declared a 20km radius from the stricken Fukushima Daiichi nuclear power plant an exclusion zone, and Namie fell into this perimeter. Without a permit issued by the Town Hall, people cannot go through the checkposts. Police zealously custody the almost empty towns. The authorities are fed up with thieves, journalists, and other trespassers. Defying this ban can lead to fines and imprisonment.

We are three occupants in the car. One of them, Yosuke Kinoshita (This is not his real name, for privacy reasons I am using a pseudonym) is originally from Namie. Namie—like other neighboring villages—became deserted due to forced evacuation (local residents were told to escape but not why; they did not know where to go, or how long they would be away).  Because his family house is located within the no-go zone, he is allowed permission to enter for a few hours at a time, in order to visit the abandoned property. The officials at the checkpoint, wearing gloves, masks and helmets, inspect our documents, IDs, and open the gate letting us into the forbidden zone.

We drive through town. It is odd that the traffic lights are working when there are no vehicles. There is nobody around, either. The scenes in front of us testify that time in Namie has stopped. In the turmoil of earthquake, tsunami, and evacuation, bicycles and cars were left abandoned; shops remain untouched after owners were forced to escape. And then, during the days to come, hydrogen explosions at the stricken reactors emitted an invisible blanket of radiation that silently and tragically covered Namie.

I get off the car at the main street to snap a few photos when suddenly police stop us. We are questioned at large. Why are we carrying cameras? What are we doing here? Are we journalists trying to pass as visitors? This treatment somehow puzzles me; as officers trying to enforce the law, their reaction is perhaps understandable but seems out of proportion. If criminal actions are to be found, it is surely among people and organizations that privileged their own self-interest rather than protecting public wellbeing. 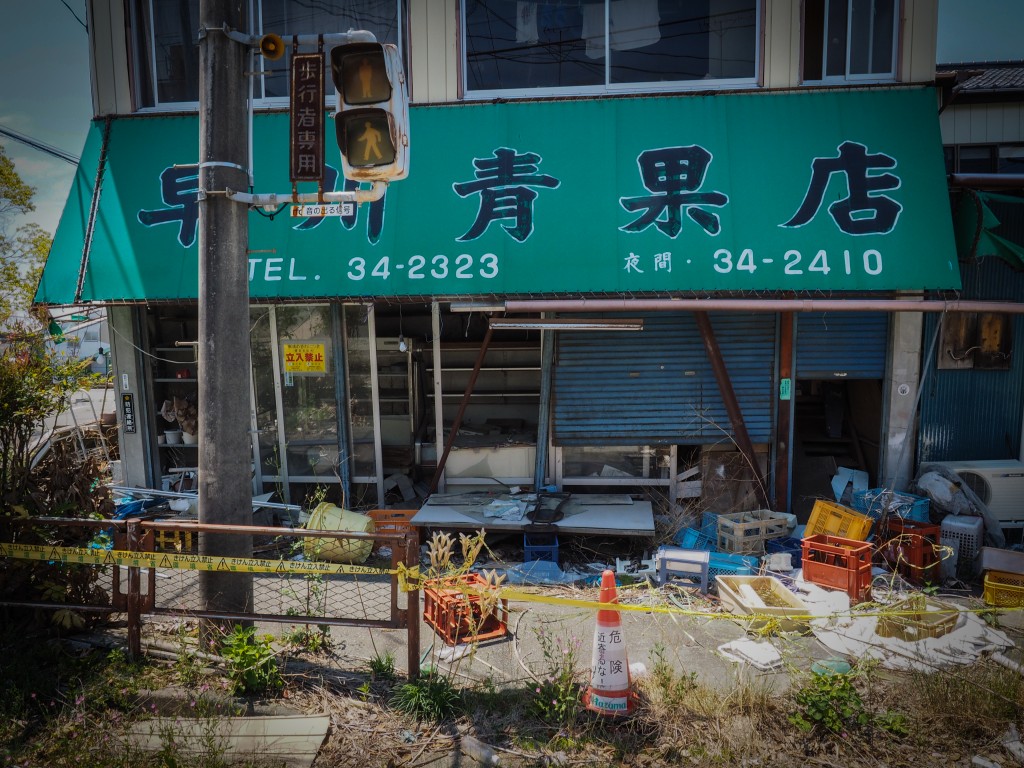 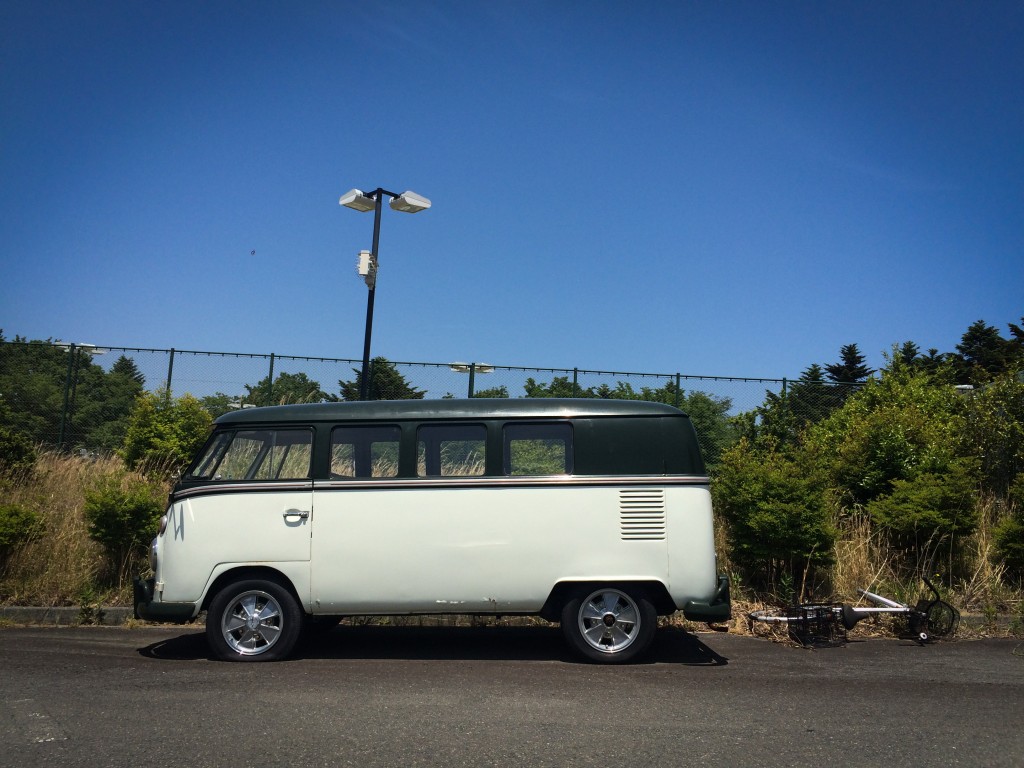 Once cleared out, our trip continues and we head to the Kinoshita’s household.  We get off the car wearing gloves and facemasks although we know they offer little protection against radiation. The aerial levels of radiation are supposed to be lower than the standard required by the Japanese government for decontamination—so we are told—but there is reason to believe there might be undetected hot spots (In addition, whether the official readings of radiation can be trusted, is a matter of dispute). We follow Kinoshita through the rubble in the garden and into the falling house. The construction is badly deteriorated.  “It’s worse every time I come”, he says. “The floor is rotten. Watch your step.” 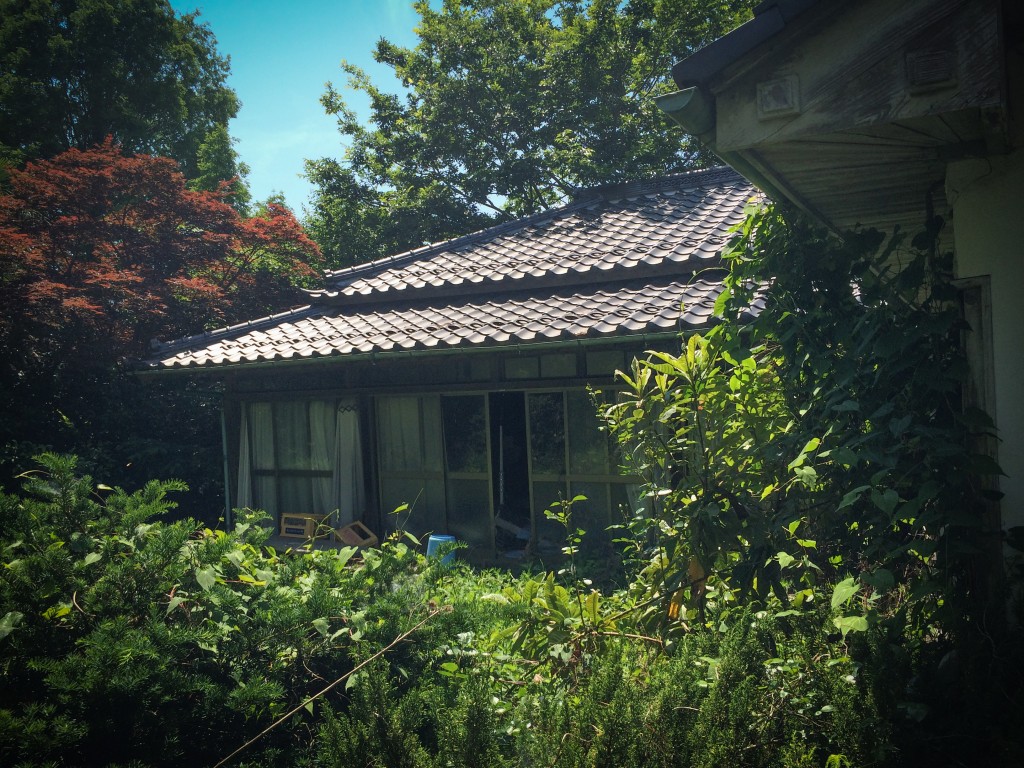 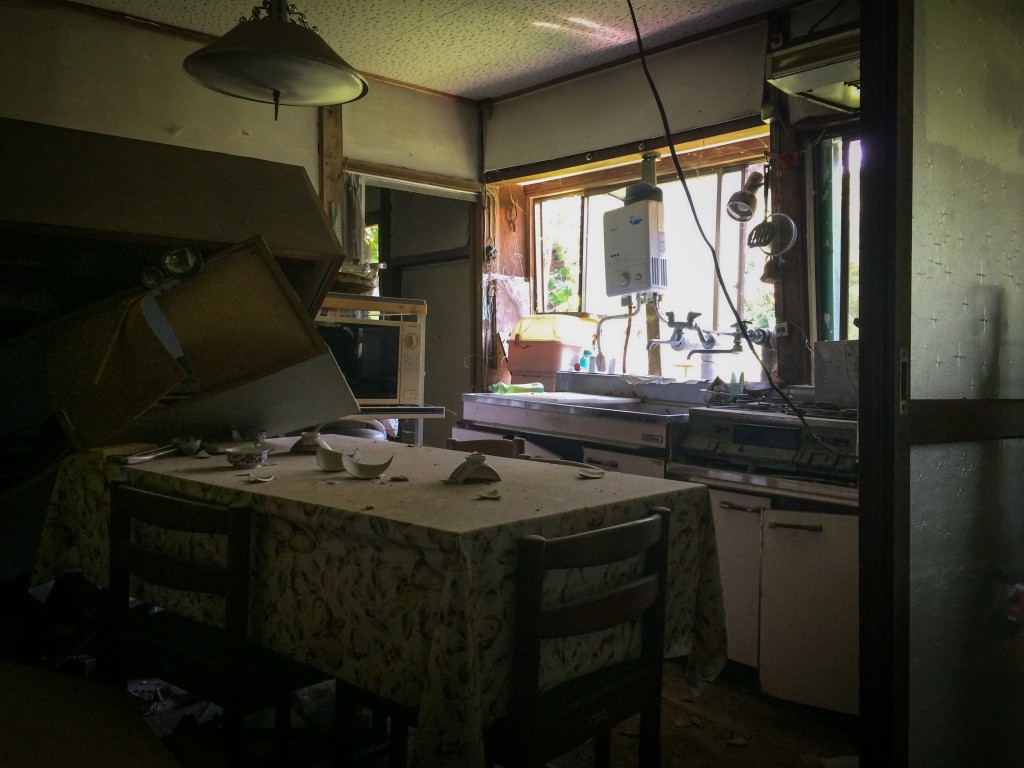 He guides us into the living room, kitchen, and other sections of the house. Objects lie all around exactly as they fell after the earthquake four years ago: family photographs, furniture, a TV set, golf clubs, kitchen utensils. I look into Kinoshita’s eyes; they look sad and pensive. A long silence falls upon us and I can’t help but imagine the tranquil life his parents must have led in this idyllic place before becoming nuclear evacuees. 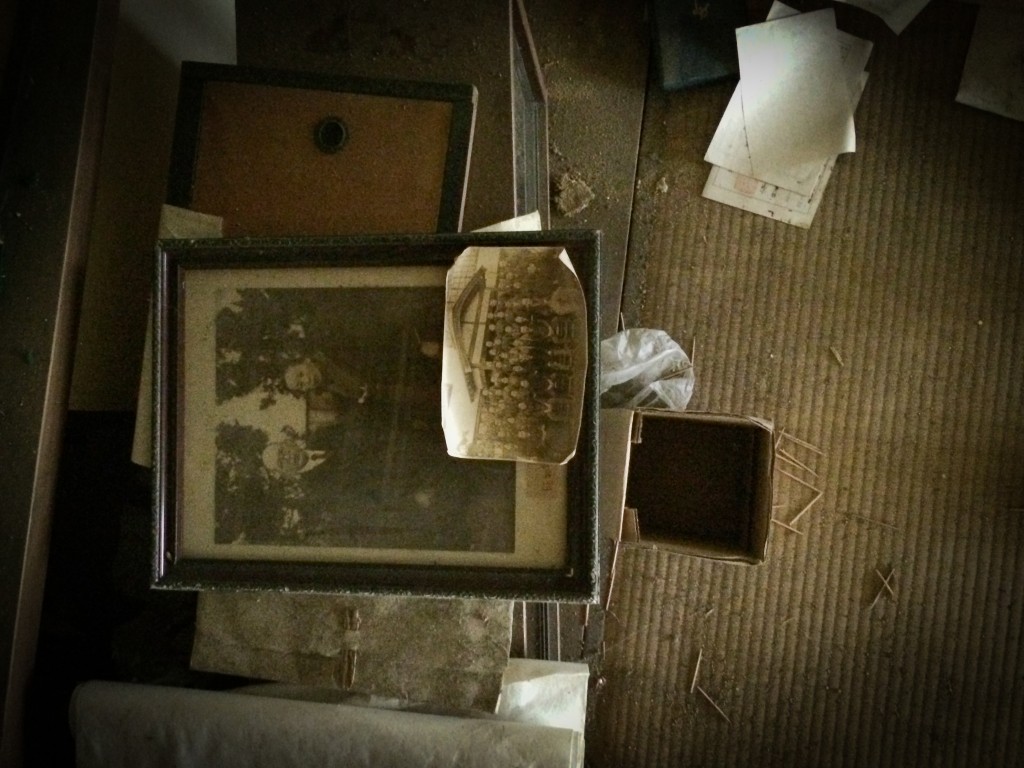 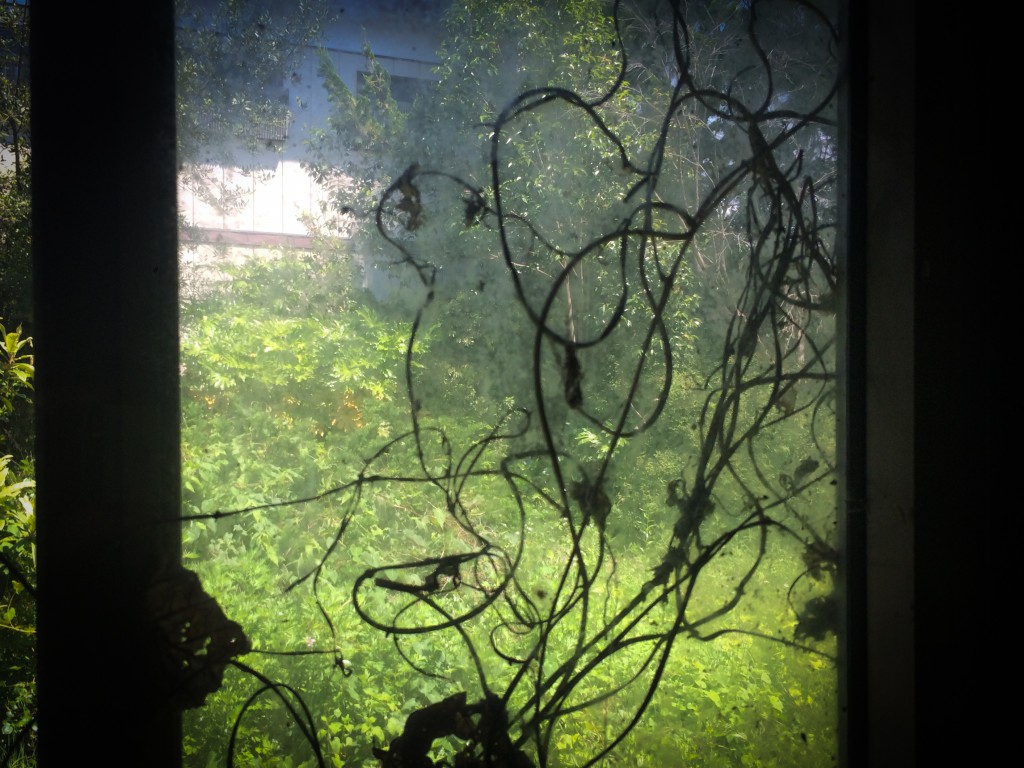 Later on we go to the coast, where the tsunami washed away the entire lower part of town, getting as far as two kilometers inland. The debris has been cleared out and is now placed in designated dumpsites. At the port of Ukedo I climb up a wall facing the beach. The silhouette of Fukushima Daiichi, which I have seen uncountable times on photographs and videos, appears in the distance, the reactors enshrouded in a heat haze. Waves break in the shore while seagulls plunge into the water, oblivious to the massive amount of radioactive water that is spilled everyday into this striking ocean. Here stands a monument to institutional failure, to corporate irresponsibility, a truly Man-Made Disaster, framed into a beautiful postcard-like image. Fukushima Daiichi is such a perfect metaphor of the human condition at the Capitalocene.

I sit and silently weep. This unexpected release of emotion makes me momentarily void of thoughts. The only feeling that remains is awe of the deep-blue sea in front of me.

The socioanthropological contribution to society in times of disaster is surely limited; no amount of ethnographic writing can ever fix a human tragedy in a measurable way. The pre-existing social fabric of Namie (and Fukushima) has ceased to exist, never to be recovered. Almost five years on, the future of hundreds of thousands of evacuees remains uncertain. And yet, people of Fukushima want to have their stories told. As anthropologists, it is our job and our mission to tell those stories in a meaningful way.

In the official discourse, Japan is fine, Fukushima is fine, nuclear power is fine, and the affected people are fine. Almost five years on, the victims of nuclear power remain, in a way, victims. The tragedy was imposed on them. Their voices have not been heard; rather, people’s notions of place and memory have been subsumed into an official discourse crafted by a state narrative.

Just days after the Fukushima disaster Nobel laureate Oe Kenzaburo wrote, “Once again we must look at things through the eyes of the victims of nuclear power, of the men and the women who have proved their courage through suffering. The lesson that we learn from the current disaster will depend on whether those who survive it resolve not to repeat their mistakes.” (See, Oe Kenzaburo, History Repeats. The New Yorker. March 28, 2011. Link.)

This is something the Japanese government, the nuclear sector, and society as a whole should learn from.

17 thoughts on “Inside the Fukushima Exclusion Zone: Place and Memory after Disaster”