Encounters with art and design by an anthropologist and curious non-expert in visual culture.

Earlier this year I was reading the Internet and came across Duke University Press’ list of “Best books of 2014”. Scrolling through, I was held by the title Syllabus: Notes from An Accidental Professor. Cartoonist and author Lynda Barry’s work Syllabus is not easy to pigeonhole into a genre. It is one part how-to manual, two parts graphic novel and a dash of memoir. Its form mimics the inexpensive composition books she asks her students to work in for the semester. Drawn in by her use of images (pardon the pun) I ordered a copy. 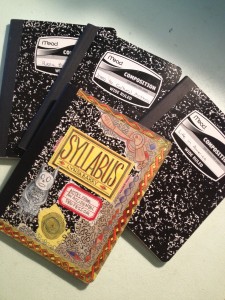 University of Toronto Press Editor, Anne Brackenbury already had me thinking about the possibilities of the graphic novel form for ethnography. Her new book series EthnoGRAPHIC makes a strong case for  “understanding the power of drawing and comics as a valuable method and way of seeing, as well as a potent teaching and communicative form that captures the sometimes less visible elements of fieldwork”. Barry’s Syllabus chronicles her methods for teaching cartoon-making classes at Wisconsin-Madison. Her courses ask bigger questions like “What is an image and how does it work?” and “Where do memories come from?” but the brass tacks of her method involves daily drawing and taking stock of the world around of you. Pieces of her approach resonated with me as teacher of ethnography and so I tried them out in my third year course Life in America: Ethnographies of Everyday Experience in the United States and at Its Borders (25 students). Here are two of the practices I found most powerful for teaching what Carole McGranahan calls ethnographic sensibilities without fieldwork.

1. X pages or 6 Minute Diary: The exercise is simple. Students begin by writing seven things they did that day. Next, they write seven things they saw. They then record one snippet of talk they heard and finish by doing a thirty-second drawing of some aspect of their day. You can have Barry time the diary entry using this video. I had them do this four to five times a week. The exercise has an arc that Barry aptly summarizes in her book. Students often say “nothing” happened and find the exercise dreadful about three days in. Then, if they stick with it, something changes. They begin to “see” differently. They start taking stock of small details that usually go unnoticed but are now somehow significant. I found it helped to compile examples of ‘rich’ observations so that they could move beyond lists like “I had a shower, played video games, did homework”.

When you take fiction writing classes, you hear a lot of clichés about details. “The devil is in the details!” “Show don’t tell!”. My own teacher Cordelia who isn’t normally into clichés (or people with MFAs, her ex-husband or wearing shoes while she teaches) would always say “the more specific you are, the more universal your writing will be”. Anthropologists can be pretty interested in the particular-universal dynamic and we sense that indeed the devil is in the details. But let’s face it, it is hard work to collect those small pieces! It is like cleaning up ocean glass from the beach. Barry’s 6-minute diary shapes habits of attention and reveals the mundane work of gathering details which at first seem insignificant, but later may build into a research question or ethnographic query. It provides a stripped-down introduction to field note taking and opened up conversations about embodied knowing and the ways we can feel ‘zoned out’ or ‘tuned in’ (their words) to what is around us.

Students’ observations of their ‘everyday’ became the platform I could build cases on about how campus spaces are used, how race comes to matter, how gender /sexuality is organized and so forth. Half way through the term, we went through the notebooks together and found the seed of a final paper. From readings they have done, they see how good ethnographers get the details right and students make strides to be more attentive. Teaching ethnography reminds me of how difficult it is to derive arguments from ‘the everyday’.

2. Self-Portraits: Here is the exercise: in lieu of attendance, provide students with 1/2 an index card for a self-portrait (broadly defined). I had a small Tupperware at the front open for five minutes before class started. Portraits must be in the box by the time we started. For the record, I have never been one to take attendance. In part, I don’t like the policing feeling, but mostly I am bad at keeping track of it and see it as a low reward burden. I decided to try the self-portrait exercise not because I wanted to track who was in class when but rather so I could amass a visual data set about the experience of the group. Again, this appeared to  students as a strange, likely pointless, exercise. Some loved it right away, others loathed it. 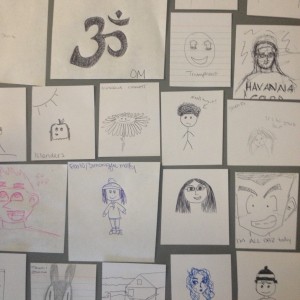 Things came around on the last class. I covered a large table with their images. I asked them to look at the pieces and think about the ‘story’ the images were able to tell. They start to see how one image may not reveal very much, however the collection revealed something about their particular college culture. There were many indexes of snow, hints of stress and anxiety, specific ways they code gender. For some students, particular drawings conjured vivid details from the day they drew the portraits. Our data of everyday life was multiplying as we talked. I could ask them about the ‘conditions of possibility’ of their collective college story and we were able to reinvigorate earlier discussions of abstract ideas like ‘de-industrialization’ and ‘the rust belt’. Through 6 minute diaries, self-portraits and other activities, they began to understand the odd practice of putting everything down on paper, clueless of what you will need or what it will mean, and later, somehow, culling and cobbling together a narrative, an argument, a picture.