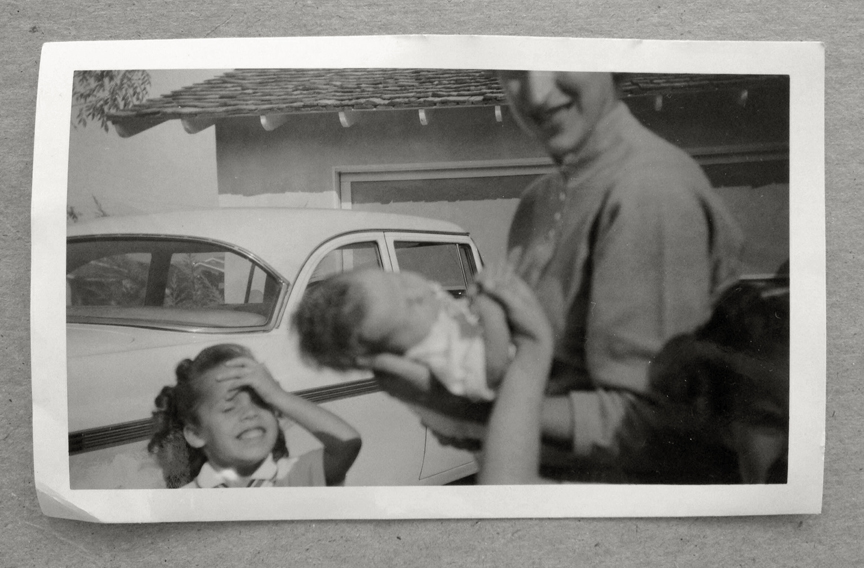 A box of photographs. Disheveled, sitting in a corner in our garage. Left behind by previous residents. Nobody seems to know where it came from or who it belongs to or whose faces are mixed in there. There are more than just photographs in this plastic box–receipts and old checkbook ledgers and even things like high school diplomas. There’s no order to any of it. But the photographs dominate. It’s as if somebody just threw these things into a pile and maybe someone else threw that mess into a box and after several rounds of this process they ended together in this disorderly, dusty cemetery of artifacts. All of those years and eyes and faces and moments just sitting there, cut off from the social lives that produced them. What strange objects, photographs.

They are small photographs forgotten. Detritus of times past. If you learn about the history of photography, these aren’t the kinds of images you spend much time reading about. Most histories of photography focus on iconic imagery, on the kinds of photographs that (supposedly) changed the world. You will learn about Matthew Brady, Lewis Hine, Dorthea Lange, Paul Strand, Ansel Adams, Sebastiao Salgado, Mary Ellen Mark and so many others. All great photographers, no doubt. There’s value in learning about iconic images and iconic photographers (especially since many of them weren’t all that iconic when they were living and breathing, particularly those dedicated documentary photographers of the early to mid 20th century).

But there’s something to the mass of mundane photographs that people produced–and cast aside–throughout the 20th century. There’s something to taking the time to learn about the non-professionals, the people who were just taking everyday photos and snapshots of life all around them. That’s why I’m drawn to boxes of photographs like this. They remind me of James Deetz’s arguments about “small things forgotten” in his famous little book.

His classic argument is that those small things tell us much more about the daily lives of people than the kinds of artifacts and material culture we might deem “valuable” upon first glance. Deetz’s little book focuses on common things, like pottery, gravestones, silverware, and even chairs (which tell us more about social relationships and changing cultural attitudes than you might think). His ideas apply to photographs as well.

What can we learn by looking at these small photographs forgotten? They may not be technically perfect, or even aesthetically pleasing, but they do offer insight into the lives, meanings, and values of people. The problem, of course, is that photographs, especially without captions, can be interpreted in so many different ways. What interests me, however, is not so much the intentional meanings that such images might hold, but also the unintentional.

Deetz argues that mundane, everyday, often discarded artifacts provide us with some of the most objective information about past lives that we can hope for. Unlike written documents, much of the material record consists of what amounts to garbage, or things left behind. This material culture tells us about the kinds of things people used, how they used them, how much they used, and how they disposed of them. It can potentially tell us much more. But none of it was intentionally left behind in order to provide future archaeologists and anthropologists with a window into the past. That is part of the power of this kind of material culture.

Photographs, on the other hand, do have a more direct meaning behind them–or at least an attempt to capture meanings through technology. People take photographs, or try to, in order to produce something. A record of a moment, something they can eventually hold in their hands and pass around (it’s a little different these days with digital photography). The act of taking photographs is, undoubtedly, done with certain future expectations in mind. Part of the beauty of amateur photography is the chasm between attempted and achieved results. Yet, beyond the question of technological capability and aesthetic success, these kinds of images do give us insight into the kinds of things that people deemed either photographable or, at least, worthy of being photographed.

The image above is a perfect example of what might be called a classic amateur image, in which the photographer was not able to capture what he/she intended. Yet it’s also an amazing, beautiful image in its own right (that’s an opinion). The baby, located in the center of the frame, appears to be the intended subject. All of the other individuals play a peripheral role. But the camera focus missed, as is apparent with the fuzzy baby in the foreground, the fuzzier girl in the lower right corner, and the razor sharp car parked in the driveway in the background. The young girl on the left, hand to her face, appears to know that everything has fallen apart.

These are just my own subjective ruminations. What do we know for sure? What does this image tell us? It tells us a little bit about the role of photography in domestic spaces and life. It’s part of a wider story of quotidian documentation, made possible by cheaper cameras, films, and photographic paper in the mid 20th century. It’s a story about daily life, and the mass photographing of almost everything that began around the 1830s and hasn’t stopped yet. It provides us with fragments of information about fashion, hair style, possible familial relations, the use of automobiles. It provides a glimpse of architectural information–see those wooden shingles? And that garage door?

Yet, so much is missing. There is almost no context to this photographs…and that’s the case with the rest of the box. Few of the images have captions to help viewers decipher what the images meant, or were supposed to mean, to the people who made them, carried them around, shared them, and eventually placed them in this box.

Beyond image content and intended meanings versus unintended meanings, I often wonder about how these kinds of photographs functioned as social objects. Elizabeth Edwards writes about photographs as material artifacts, and also as “relationships made visible.” I find this artifactual view of photographs fascinating. I think about the life history of such objects, as they made their way from clean boxes of paper to darkrooms to albums to being passed through different hands and lives. Think about all the scuffs, bends, scratches, stains, and creases on such photographs, and the small events they represent. Mostly, I wonder about who it was, finally, that made the decision to leave these images behind.

These questions make me want to get back to photography, but in a very different way than I imagined years ago.