(Savage Minds is pleased to run this guest column from Gina Athena Ulysse in tribute to Karen McCarthy Brown. Gina is an associate professor of anthropology at Wesleyan University. Born in Haiti, she has lived in the United States for the last thirty years. She is also a poet, performance artist and multi-media artist. Prof U, as her students call her, is the author of Downtown Ladies: Informal Commercial Importers, A Haitian Anthropologist and Self-Making in Jamaica (Chicago 2008). She recently completed Why Haiti Needs New Narratives, a collection of post-quake dispatches, essays and meditations written between 2010-2012. Currently, she is developing VooDooDoll, What if Haiti Were a Woman, a performance-installation project. Her writing has been published in Gastronomica, Souls, and Transition.)

News that Karen McCarthy Brown passed away after years of deteriorating illness reached me earlier this month. I kept it to myself. When more official announcement from Drew University–where she was Professor Emerita of anthropology and sociology of religion—showed up on my Facebook feed this past Sunday, I shared it with the following comment:

Reading Karen’s Mama Lola kept me in grad school. Vodou got a human face from her. A tremendous loss, indeed.

When the first email arrived from UCSB’s Claudine Michel who penned the preface to the third edition of Brown’s award-winning ethnography in 2010, I had a flashback to nearly two decades ago.

I was sitting across from the department chair. We were in his office on the first floor of the LS&A building on S. State Street. I wanted out of the anthropology Ph.D. program at the University of Michigan. In our long conversation, I disclosed more vulnerabilities then I ever would again professionally. Tormented, I grappled with the racist history of a discipline in which I would always be a subject. I did not belong in this white institution and was exhausted from feeling I was desegregating the department all over again. Hang in there, he said. Minority retention at the doctoral level is a huge problem all over this country. It may not get easier but at least it will become more manageable. You can do it. Just don’t give up you will be a pioneer. I broke into sobs. I can’t be a pioneer, it’s not the 1950s. Was there anyone whose work really interested me? Well, there was this book, Mama Lola, about a Vodou priestess in Brooklyn. Did I know the author? No I did not. The subject was close to home. We had inherited responsibilities that have been overstretched by migration. It’s not something that we talk about. Maybe after your dissertation on Jamaica, you’ll write another book on your family’s story. In the meantime was there enough interest in this work to bring her to campus? Mere thoughts of that someday became inspiration enough to help me keep my eyes on the prize.

Karen McCarthy Brown did come to give a talk at UM on Mama Lola: A Vodou Priestess in Brooklyn. Between the mainstreaming feminism project led by a group of senior graduate students and supporting faculty, the event occurred a year or so later. Since I don’t do revisionist history—full disclosure—I remember sketchy details of this and my first encounter with Karen. 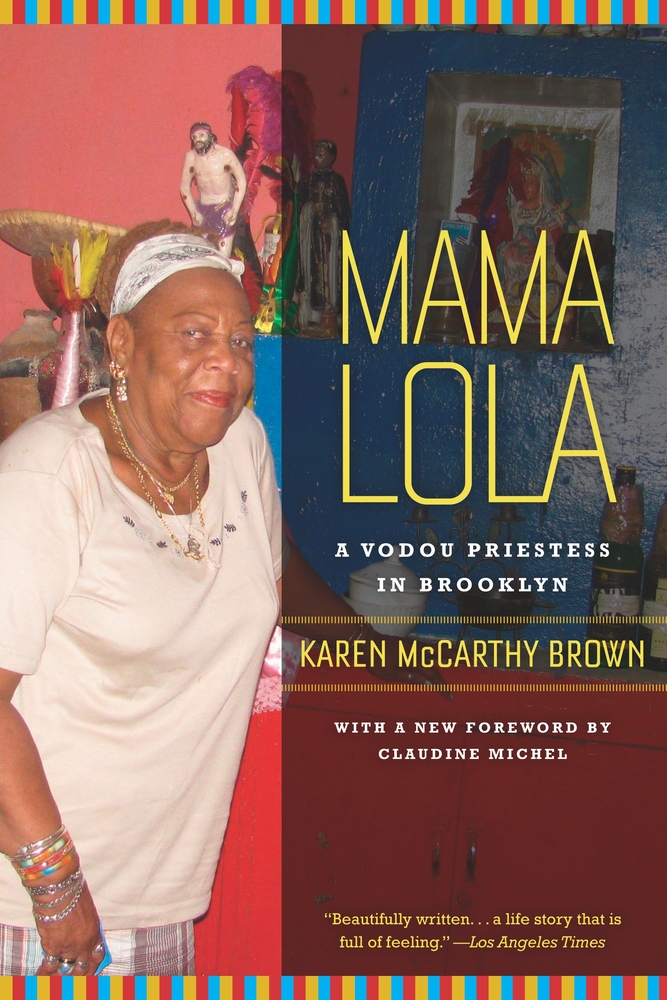 Mama Lola was published by the University of California Press in 1991. Based on extensive fieldwork conducted over a decade, Brown became an initiate of her subject, as a condition to deeper research and writing her life history. The resulting ethnography with its radical crossings blurred methodological and scriptive lines. Brown took creative liberties fictionalizing various strands of Lola’s familial and spiritual genealogies. The cover illustration of the first edition featured a doll from Lola’s altar representing the spirit Ezili Danto.

The book was hailed as a “new postmodern ethnography,” or “new feminist ethnography” (2001:ix) exemplary of this new genre of ethnographic writing that simultaneously weaved narrative analysis, the autobiographical and critical insights. Brown actually eschewed this connection. As she noted in the book’s second edition, which had a photograph of Lola herself on the cover, “I cannot claim to have self-consciously positioned my book in those niches” (2001:x). To the end, she re-asserted that she considered the work “primarily an exercise in interpretation” as she had done a decade before (2001:x). Brown would become a renowned religion expert and one of the founding members of KOSANBA—The Congress of Santa Barbara, a scholarly association for the study of Haitian Vodou.

A highly recognized work, Mama Lola was awarded the best first book in the History of Religions of the American Academy of Religion (1991) and the Victor Turner Prize of the American Anthropological Association (1992). But it was not without its critics. Chief among them was premier Haitian anthropologist, the late Michel-Rolph Trouillot who rightfully asked a most fundamental question: how much fiction is ethnography? Moreover, he questioned various tensions between Brown’s ethnographic authority and totalizing narrative. To that end, he wrote, “those unfamiliar with Haiti will lack the means by which to evaluate the global assertions of the transcendental narrator” (1994:653). I had not read Trouillot’s review in American Ethnologist until years later after a conversation with him at the AAAs.

Indeed, in many ways, Mama Lola was something of an insider ethnography. In retrospect, I formed an attachment to it precisely because I had some knowledge to discern fact from fiction, to fill in the silences and to decipher practices layered in an opacity that was part of a historically damaging trope. Simultaneously, it expanded my lexicon as I learned so much about religious practices in my birth country that to this day remain trapped in obscurity, familial and otherwise. In that sense, the book had done for me what anthropology is supposed to do, make the familiar strange and the strange familiar. It also sensitized me to the restrictions of genres, fieldwork dynamics and negotiations among so many other things. I knew there would never be an ethnography of my family’s story. Performance, maybe?. Memoir, definitely. Some stories are not mine to tell.

Since I began teaching years ago, I routinely used Mama Lola in my staple Haiti course. Despite my own feminist critiques, it’s an excellent project with which to debunk stereotypes, explore conflicts between researcher and subject and point to other disciplinary shortcomings. What I appreciated then and still do despite its limits is that this book, which kept me in grad school, actually managed to accomplish something that had been quite elusive until its publication. By (re)/constructing the So-Called Life of Marie Thérèse Alourdes Macena Margaux Kowalski, Karen gave Vodou a human face, at least in anthropology and one step beyond. Considering the long history of demonization and stigmatization that marred the religion, this is a Herculean achievement indeed, for which Karen McCarthy Brown should be recognized. Chapo ba!!!!!!!

One thought on “Karen McCarthy Brown’s Mama Lola, or that Book that Kept Me in Grad School”