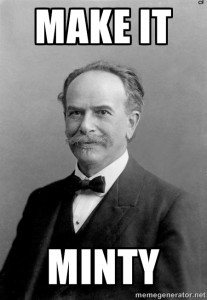 What better way to celebrate our discipline than with mint chip ice-cream, thin mint cookies, mint juleps, and alcoholic shamrock shakes. Expect more minty recipes for National Anthropology Day in a future SM post, or share yours below in the comments!

As it turns out, one does not merely call the National Confectioners Association. I had imagined I would reach a single lobbyist with an intern. In fact, they have a massive phone tree. I’m not surprised — if you think about it, they are probably a huge operation. At any rate after waiting on hold and listening to “Underneath the Lollipop Tree” a few times, I eventually reached a human.

Turns out, they had never heard of the American Anthropological Association or National Anthropology Day, and dumped me to the voicemail of the head of communications. Then I spent like a gazillion hours explaining why Peter Wood is wrong and got distracted. I’ll keep you updated as this situation unfolds.

Now, of course, you are far more likely to recognize 19 February as Chinese New Year (or, to be politically correct, lunar new year). I’m sure Kerim will write a post with some downloadable signs you can print up for the office wishing people long life, prosperity, and happy National Anthropology Day. But until then, my friends, keep it minty.

3 thoughts on “This National Anthropology Day, Make It Minty”