It is 8:00 in the morning in Colorado. On the other side of the world a young Tibetan woman self-immolated at 2:00 pm today, Monday the 22nd of December 2014. Her name was Tsering Dolma (and her nickname was Tsepey). She was twenty years old. She was the 141st Tibetan to self-immolate in recent years. 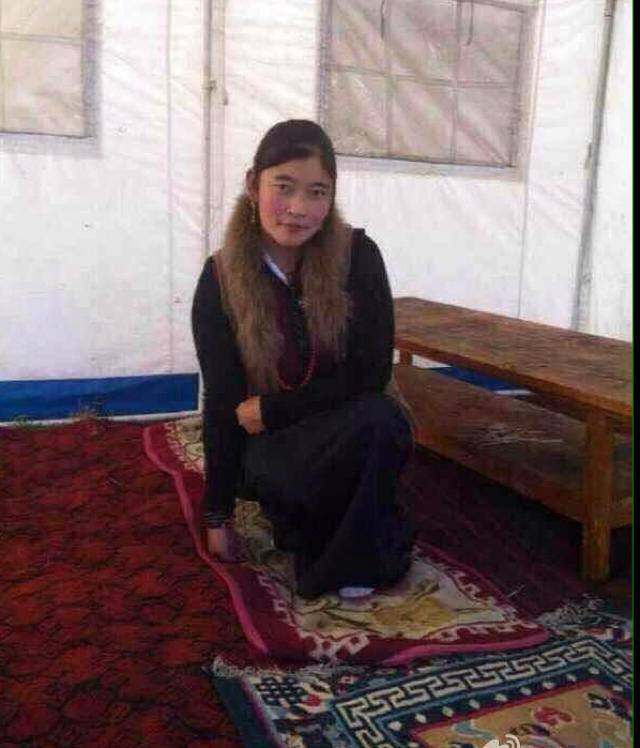 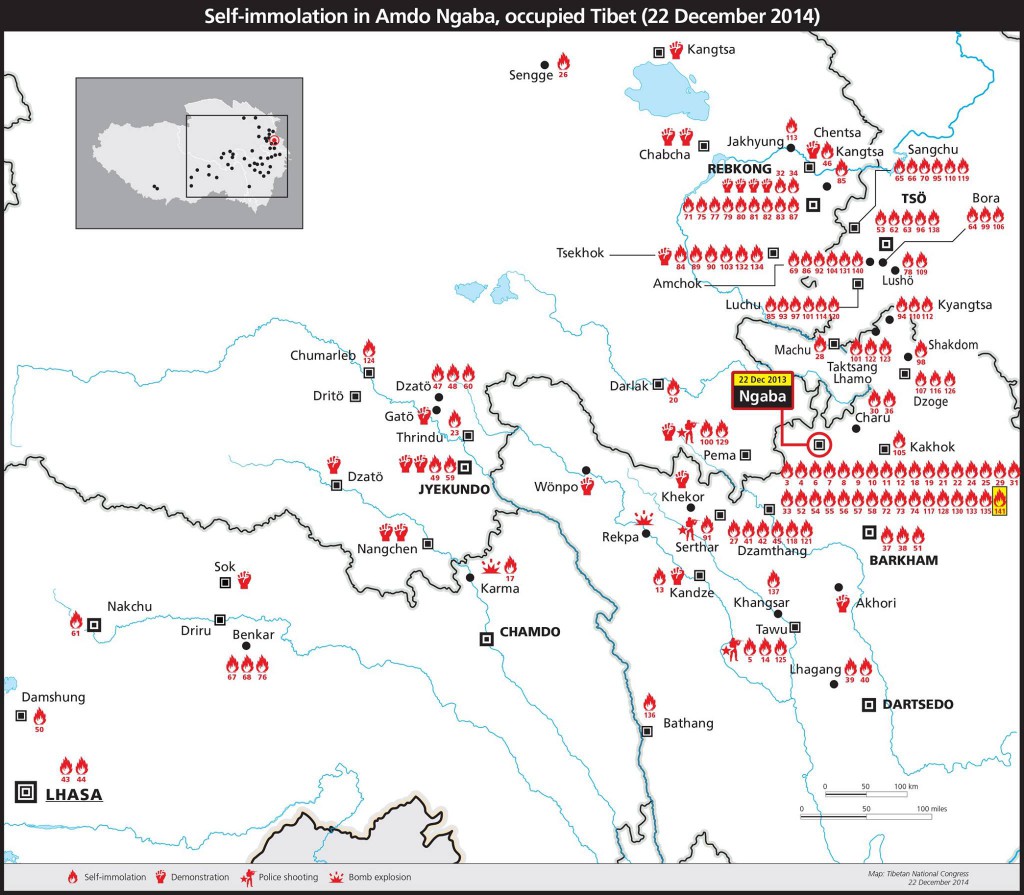 Why are Tibetans self-immolating? Answering this question requires a brief history lesson: in 1949 Mao Zedong’s communist army defeated Chiang Kai-shek’s nationalist army. One of the first things Mao said he would do was liberate Tibet. He was true to his word, invading Tibet and forcing a political agreement with the Dalai Lama’s government in 1951 that made Tibet a part of the People’s Republic of China. Tibetans initially tried to cooperate with the Chinese, but the situation grew increasingly bad with drastic reforms, abuses of political and religious leaders, and the destruction of Tibetan Buddhist monasteries, scriptures, statues. A grassroots army formed in eastern Tibet to fight against the Chinese. Thousands of Tibetans fled to Lhasa, Tibet’s capital. The situation continued to deteriorate. Finally, in 1959, under suspicions of a Chinese plot to assassinate the Dalai Lama, he escaped in disguise to India. Thousands of Tibetans followed. They thought they would be in exile for a short while then return to Tibet, that the world would come to their aid, that in this global moment of decolonization a new case of colonization would not be allowed. It was.

Tibetans have now been in exile for over 55 years. Two generations, now three, of Tibetan refugees have been born in exile. And millions of Tibetans are still in Tibet. A Tibet partitioned into different Chinese provinces—Gansu, Qinghai, Sichuan, Xizang, Yunnan—as “Tibetan autonomous” counties, prefectures, and regions. This political history and this separation of community are key to the self-immolations.

Why self-immolate? My best answer comes from the self-immolators themselves. I can’t do ethnographic fieldwork with self-immolators. Neither anthropologists nor journalists are allowed to Tibet to do research on self-immolation, nor are any foreign journalists posted to Tibet at all (that’s right, none. There are more foreign journalists in North Korea than in Tibet). Nor do historians have historical materials on which to draw: there is no history of self-immolation in Tibet save an 11th century monk named Dolchung Korpon who self-immolated in front of the sacred Jowo statue in the Jokhang Temple in Lhasa. Instead, this is a contemporary global practice associated with the Vietnamese Buddhist monk Thich Quang Duc. His now-iconic 1963 protest in Saigon against the Diem government is considered to have established self-immolation as a 20th century—and now 21st century—form of political protest.

In lieu of fieldwork, I thus turn to the words of the self-immolators themselves. Some have left behind written testimonies:

To ensure the Dalai Lama’s return to Tibet:

Do not indulge in slaughtering and trading of animals.

Bearing all sufferings of sentient beings on myself,

Do not resist by fighting if I get into Chinese hands alive.

On fire I burn,

Do not worry my family.

Others have left video testimonies:

To all the six million Tibetans, including those living in exile — I am grateful to Pawo Thupten Ngodup and all other Tibetan heroes, who have sacrificed their lives for Tibet and for the reunification of the Tibetan people; though I am in my forties, until now I have not had the courage like them. But I have tried my best to teach all traditional fields of knowledge to others, including Buddhism.

This is the 21st century, and this is the year in which so many Tibetan heroes have died. I am sacrificing my body both to stand in solidarity with them in flesh and blood, and to seek repentance through this highest tantric honor of offering one’s body. This is not to seek personal fame or glory.

I am giving away my body as an offering of light to chase away the darkness, to free all beings from suffering, and to lead them – each of whom has been our mother in the past and yet has been led by ignorance to commit immoral acts – to the Amitabha, the Buddha of infinite light. My offering of light is for all living beings, even as insignificant as lice and nits, to dispel their pain and to guide them to the state of enlightenment. …..

I am taking this action neither for myself nor to fulfill a personal desire nor to earn an honor. I am sacrificing my body with the firm conviction and a pure heart just as the Buddha bravely gave his body to a hungry tigress. All the Tibetan heroes too have sacrificed their lives with similar principles. But in practical terms, their lives seemingly ended with some sort of anger. Therefore, to guide their souls on the path to enlightenment, I offer prayers that may lead all of them to Buddhahood.

May all spiritual teachers and lamas inside Tibet and in exile live long. Especially, I pray that His Holiness the Dalai Lama will return to Tibet and remain as Tibet’s temporal and spiritual leader. …..

In the burning state, many self-immolators shout out. People who are close by them can hear and can record what they say:

Long life to the Dalai Lama!

All of the self-immolators have done so in public. Each has immolated in a public location and as an event centered in their own body. As a young man in Pokhara, Nepal told me when we learned of Thubten Ngodup’s self-immolation in 1998: “He killed himself, he didn’t harm anyone else. Unlike a suicide bomber, he didn’t kill anyone else when he set himself on fire.”

rang lus me mchod/self-offering in fire

These terms are new to the Tibetan language, and yet have immediate cultural and religious resonance. They capture in words an action that both precedes and transcends them. The limits of language are also seen in art, with much of the most powerful commentary on the self-immolations coming from contemporary Tibetan artists such as this painting below by Tashi Norbu titled “Self-Immolation.” 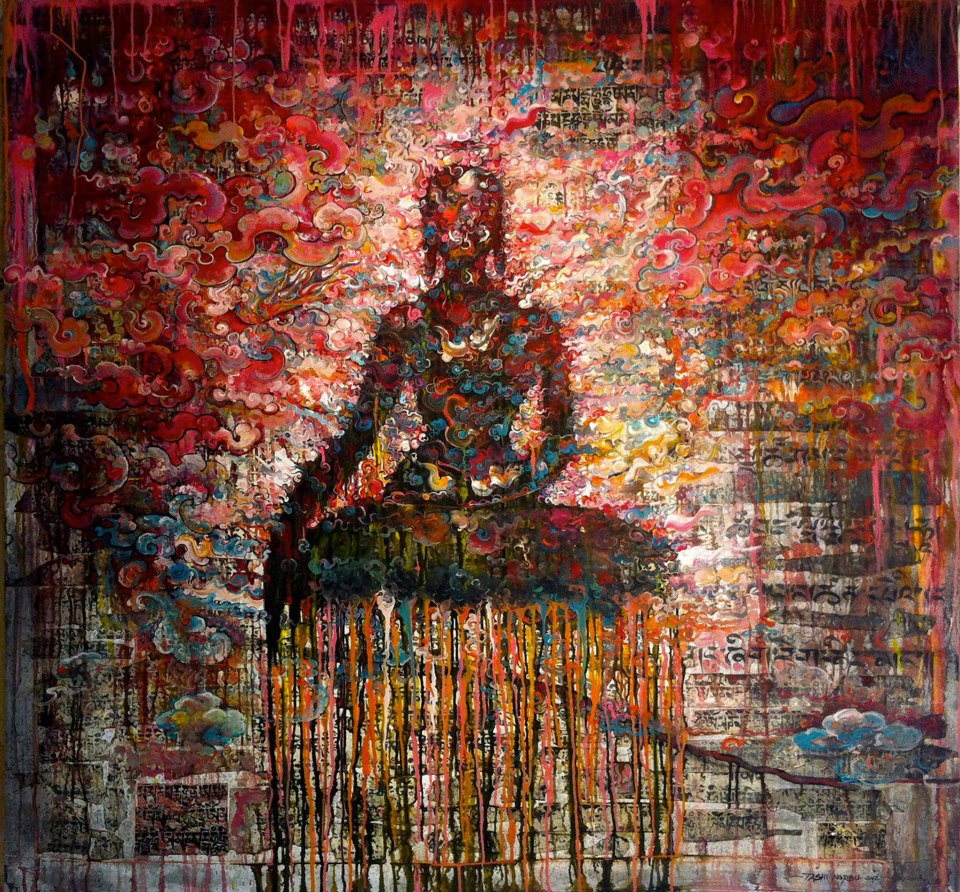 Anthropologists are among those who have tried to make sense of these actions. In 2012, Ralph Litzinger and I edited a special issue of Cultural Anthropology on the self-immolations. Over twenty scholars and intellectuals from the Tibetan and the Tibetan Studies community joined forces to bring our collective knowledge and experience to try to say something about what was going on. To provide context. To provide cultural and religious and political foundations. To think out loud. To hope:

Sienna Craig on Social Suffering and Embodied Political Crisis. Giovanni da Col with Five Armchair Remarks on Tibetan Personhood. Charlene Makley on The Political Lives of Dead Bodies. Leigh (Sangster) Miller’s The Work of Art in the Age of Self-Immolation. Tsering Shakya on Transforming the Language of Protest. And many more.

The sort of anthropology we can do in this moment requires a new sort of field. One cannot, for example, get permission from the Chinese government to go to Kirti Monastery in Ngaba to do research. Kirti is one of the centers of the self-immolations: twenty-four monks and former monks from Kirti Monastery have self-immolated, along with two nuns from nearby Mame Dechen Chokorling Nunnery. Instead, we rely on our existing scholarly knowledge, on our ongoing research, on citizen journalists in Tibet, on trusted voices in social media, and on Tibetan activists inside and outside of Tibet. This is a networked anthropology that is both digital and on-the-ground. It has to be. These acts are public and so is the anthropology with which we must respond.

The Chinese and Nepali governments have kept bodies of deceased self-immolators, denying families the ability to properly conduct funeral rituals for the deceased. Family members of self-immolators have been arrested. Security has increased in various regions of Tibet. Police now appear in recent photos holding not just guns, but fire extinguishers. Crackdowns on internet access, on religious practice, on Tibetan language instruction, on any form of protest have proliferated.

In November, eight Tibetans were jailed for up to five years for aiding in the “murder” of self-immolator Tseten. Thirty years old, father of two, Tseten self-immolated on the main street in the town of Meruma in Ngaba county, home also to Kirti Monastery, and currently part of the Chinese province of Sichuan and formerly of the Tibetan region of Amdo. Meruma is the same town in which Tsepey self-immolated today at 2:00 in the afternoon.

Two o’clock is almost here. I have finished my grading for the semester and have moved to wrapping presents to put under our Christmas tree. It is snowing outside. A fire blazes in the wood stove. The dog naps happily in front of the fire. I wonder what we will have for dinner. I started writing this six hours ago. It is now two o’clock. The fire has been burning the whole time.

The fire is burning.

The fire is still burning.

With thanks to Dawa Lokyitsang, Dechen Pemba, Dhondup Tashi Rekjong, and Rangzen Chowkidar.

7 thoughts on “141: For Tsepey Who Self-Immolated in Tibet Six Hours From Now”