Recently, the television network NBC started filming Dig, a new archeology drama set in Jerusalem. Normally, we’d be ecstatic to see our fellow archaeologists getting such media fanfare. But there is nothing normal about this venture. Filmed on-site in illegally annexed East Jerusalem, the show is underwritten by 6.5 million dollar grant from the Israeli government. For comparisons sake, this means Israel is spending more to film Dig than on the yearly education budget for all K-12 Palestinian schools.

So why is the Israeli government, currently in the midst of a budget crisis, throwing millions at NBC to get Dig on the air? Because they know something we’ve been reluctant to own up to: archeological knowledge remains one of the Israeli state’s most powerful weapons. If Dig unearths anything, it is that in Israel archeology is neither a neutral nor innocent enterprise. Instead, it has become just one more tool in the occupation of Palestinian lands.

As anthropologists and archeologists, we should be especially concerned when we see our discipline being misused to promote discrimination and occupation. By endorsing Palestinians’ call for BDS, the AAA has a unique opportunity to highlight the misappropriation of our scholarly techniques and defend the good name of our profession.

NBC’s Dig is filmed on location in the illegally annexed Palestinian neighborhood of Silwan, situated just outside the Old City of Jerusalem. Since 1967, Silwan has become a keystone of Israeli policies to exert control, expropriate land, and legitimize its occupation of the eastern parts of the city. In this ongoing effort, archeology is the state’s handmaiden.

In the 1990s, the state outsourced control of the neighborhood’s archaeological sites to Elad, a right-wing settler organization whose goals include: “settling families in the City of David and developing the site as a Jewish neighborhood.”

The way Elad, state archeologists, and the municipality collaborate to advance the goal of “unifying Jerusalem” is illustrative of the problematic implementation of archeology in Israel more broadly. As a private entity, Elad has gotten away with using shady tactics, discriminatory laws, and even outright fraud to expel Palestinian residents of the village and replace them with Jewish settlers. Despite the organization’s record of illegal activities, the Israeli Antiquities Authority continues to outsource the management of major archaeological sites in occupied East Jerusalem to Elad.

Predictably, Elad’s archaeological digs work to further its goals of displacing the occupied village’s Palestinian population and increasing its Jewish character.  One of its first projects was the excavation of the Spring House, which resulted in the village springs being closed to Palestinian residents, even as Elad facilitated water-access for Silwan’s new Jewish settlers. Since then, Elad has been continuously expanding the scope of its settler project under the guise of “archeological fact-finding.” What begins as archaeological projects often ends in the construction of illegal settlement housing for the exclusive use of Jewish Israelis. In the words of Jawad Siyam, a 39-year old resident of Silwan, whose grandmother’s home was among the first to be seized:

The settlers began by taking over homes around the site…Then they were given the main excavation site, and built new homes in the park. And now they are finding new sites, fencing off more land and digging under our houses.

The most recent project seeks to establish a seven-story museum on top of an archaeological site at the entrance to the village, despite the damage it will likely cause to ongoing archaeological excavations. Archaeological findings will be used to draw in international tourists, most of whom will never even realize that they are unwittingly contributing with their feet and wallets to illegal settlement activity in the village.

Here, as in other parts of the occupied West Bank, archaeological digs serve to create “facts on the grounds,” ultimately aiding and abetting the displacement of residents from this occupied Palestinian neighborhood, while opening the door for more settlement growth in East Jerusalem. 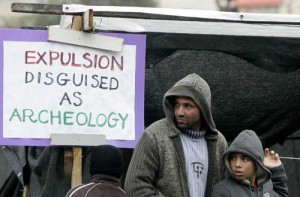 The close ties between the occupation and archaeology can also affect the ability of academics to carry out their research. When archaeological inquiry and political agendas have come in conflict, the latter have won out.

After all, it’s hard to prioritize matters of scientific concerns when you’re carrying out ideological missions. Hence, in 2011, when excavations uncovered a Byzantine-era pit, Elad was quick to announce that they had just found the prophet Jeremiah’s pit. This, despite Prof. Ronny Reich of the Israeli Antiquities Authority calling the claim “nonsense.” Lacking any archaeological evidence, Elad nevertheless proceeded to turn the pit into a mainstay of their tours of the area. So too the details of the archeological record: in order to make “Jeremiah’s Pit” more attractive to tour groups, Elad built up a special events hall on the site, demolishing one of the its walls before it has could be properly excavated.

In other more egregious cases, Elad has gone so far as to destroy Muslim artifacts and remnants, even recklessly throwing out Islamic-era skeletons. In these cases, the organization appears to value its mission of “developing the site as a Jewish neighborhood” over and above its commitment to a faithful archaeological record. Needless to say, such practices contravene archeological codes of ethics concerning “equitable partnerships” with indigenous populations, as stipulated by the World Archeological Congress.1 Unfortunately, valuable historical information is not the only or even the most direct causality of the poor archaeological methods promoted by Elad. The organization has also pioneered strategies designed to use archaeology to further the removal of Palestinian residents of the village and extend Israeli sovereignty over East Jerusalem.

In East Jerusalem, archeology is not merely a pretext for land expropriation. It is also provides a tactic and mechanism for making Palestinian homes uninhabitable.

In most parts of the world, the archaeological method of burrowing horizontal tunnels underground has long been considered invalid. The practice fell into disuse nearly a hundred years ago, when it was replaced by the stratigraphic method of digging using vertical columns. Except for in Israel, where archaeologists are reverting back to the practice of excavating lateral tunnels, in the process causing massive structural damage to densely-populated Palestinian neighborhoods, housing, and roads in East Jerusalem.

By prioritizing what lies beneath the surface, the scientifically-dubious horizontal tunnel system works to (quite literally) underminePalestinian infrastructure. Ground-level subsidence caused by these out-dated archaeological methods has become so frequent that nearly every house in Silwan now displays visible cracks. In 2009, the collapse of one tunnel caused a Palestinian girls school to give way, injuring 17 children in the process. Months later later, a break in a different section of the same site led to the collapse of a mosque parking lot, leaving behind a large crater. And a similar cave-in near a kindergarten produced a 4-meter deep pit that has yet to be fully repaired.

Meanwhile, the Jerusalem municipality has stepped in to declare various sites undermined by the excavations unsafe, providing them with the perfect excuse for demolishing more Palestinian infrastructure in East Jerusalem. In September, after surveying some of the recently weakened structures in the al-Qirmi neighborhood, the city proceeded to issue 20 new eviction orders. In this case, archeology works not only as an ideological tool, but also, in the hands of Elad, as an instrument of dispossession.

When asked about the potential danger posed to Silwan’s residents by the use of tunneling, the founder of the settler-archeology group Elad freely admitted that the dig will threaten Palestinian homes:

As Yonathan Mizrahi, an archaeologist who use to work for the Israeli Antiquities Authority noted:  “They want to use archaeology, even bogus archaeology, to provide cover for their political agenda of pushing Silwan’s Palestinians out.”

Silwan: A Microcosm of Israeli Archaeology

Unfortunately, the experience of Silwan is exemplary, rather than exceptional, of the uses and abuses of archaeology by the Israeli state. Many villages in the region have been continuously inhabited for centuries or even millennia. As a result, most anywhere in the region can reasonably be described as sitting atop a site of at least some archaeological significance. Rather than use this to enrich our understanding of the region, however, both the Israeli state and settler groups have cynically used this rich historical legacy to further its occupation. In effect, archaeology has become another military strategy.

This is not a particularly new phenomenon. As the renowned anthropologist Nadia Abu El-Haj documents in her book, Facts on the Ground, archaeological practices were integral to early Zionist efforts to colonize Palestine even before 1948. The sorts of selective and at times unsustainable historical myths that were so integral to the fashioning of early Zionist identity continue apace in the ways Elad (mis)represents the archaeological record. More directly, she also shows how the post-1967 demolition of the Old City’s Moroccan Quarter quite literally paved the way for further dispossession dressed-up as archaeological exploration (Chapter 7).

However, in recent years these long-standing tactics have been intensified as Israel seeks to fundamentally remake the landscape of Palestine/Israel in the wake of the failure of the Oslo peace talks.

While Elad’s work in Silwan is perhaps the most dramatic example, it is far from unique. From declaring “archaeological zones” that are up to 20-times larger in area than the actual dig site to demolishing even temporary structures, and from evicting residents to rejecting locally developed alternatives for preservation of sites, archaeological projects are increasingly being used by the Israeli state to violently remake the demographics of the region. As the Israeli archaeological NGO Emek Shaveh has argued, many of these projects seem to stem “from the desire to create a contiguous Israeli area that will be almost entirely free of Palestinians; the eviction of village residents will ease the future annexation of the area to Israel.”

As one might suspect given the region’s historical import, Palestine/Israel contains some of the most important archaeological research sites in the world. Unfortunately, these projects are increasingly being driven by political, rather than scientific, demands. The result threatens to tarnish the good name of our discipline and implicate us in the occupation of Palestinian lands.

The AAA has a history of defending the discipline from those who would misuse it for their own ends. Most recently, the American Anthropological Association protested the show American Diggers. According to the letter sent to SpikeTV by the AAA: “The program will undermine critical public support for the protection, preservation, and interpretation of the archaeological record.” In Palestine/Israel, the status of archaeology as an academic enterprise faces similar threats. The use of archaeological projects to displace Palestinians, expand settlements, and promote a narrow ideological agenda threaten to turn this pursuit of historical knowledge into another tool of occupation and discrimination.

The AAA has a duty to continue defending the reputation of the discipline, especially at a moment when an American television station is seeking to collaborate such a discriminatory project. Endorsing a united Palestinian civil society’s call for BDS sends a strong message. This message is directed first and foremost at the cynical misuses of our discipline’s techniques by the Israeli government. But it is also a clear directive to corporations like NBC who would seek to make a quick buck on the dispossession of Palestinian lands. As we demonstrated in our recent commentary on American Diggers, this is one area where the AAA’s voice has a very large impact.

14 thoughts on “Digging the Occupation: The Politics of Boycotts and Archeology in Israel (BDS pt. 3)”