I’d like to think that most anthropologists now accept that you don’t have to travel to do ethnographic research. Ethnographic sensibilities are in the mind as well as the body, and just as John Urry concluded that tourism is a way of seeing the world, we could argue that ethnography is a way of experiencing and making sense, wherever you are. 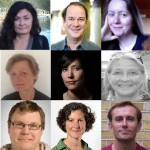 One of the pleasures of Arctic Encounters has been an opportunity to do joint fieldwork, a mode that increasing numbers of my colleagues are favouring these days, and to engage with the work of colleagues across the ‘circumpolar north’.

Ethnography need not be a personal quest, and it amazes me that the myth of the lone ethnographer continues to be reproduced in so many departments of Anthropology, despite the abundance of counter-examples. Conducting joint fieldwork with colleagues in their home country can offer the best of both worlds, combing a depth of historical engagement with the outsider’s curiosity. Collaboration is not only between ethnographers, of course, and we have also had the privilege to encounter some exceptional projects that shed new light on ways of travelling.

This week saw the launch of a web-based resource on Pan-Inuit Trails that has been many years in the making, led by Michael Bravo at Cambridge University, Claudio Aporta at Dalhousie, and Fraser Taylor at Carleton. Bravo’s work on documenting Inuit routes and trails has, over many years, gradually revealed to the wider world the intimate knowledge of seasonal mobility that Inuit people have carried with them over the generations. The scale of the route is breathtaking, reaching from Alaska to Greenland, providing an important counterweight to heroic modernist discourses about the North West Passage.

These routes also offer a rather different discursive representation to those that conjure an exotic Arctic through naturalistic emblems and images that seem to extract human presence from the landscape.  Among environmentalists, as much as in governmental and corporate statements, the Arctic is portrayed as a terra nullius, ‘wasteland’ and ‘hostile’ to man, yet home to many natural species. The white of the ice continues to be identified with purity, and images of the polar ice cap now stand as a direct proxy for climate change.

Human presence is imputed through climate change created elsewhere, with the Arctic as innocent victim of humanity’s exploitation of resources. White animals – polar bears, arctic foxes, seals, owls, predominate in the campaigns by Greenpeace, for example, in a canny use of visual association. But fieldwork in the Arctic regions provides the material to counter clean-slate anti-human imagery and remind us that the Arctic is peopled and has long been so. Research on arctic questions is building. Arctic Domus based in Aberdeen documents how people and animals build sustainable communities around the circumpolar Arctic, and Mariann Lien will lead a residency at the Centre for Advanced Study in Oslo on Arctic Domestication in the era of the Anthropocene in 2015-16. So although significant funding is going into Arctic oil and gas research, the voices of people living in the far North will be heard.

If I can end this blog with a plug, it will be to look out for our conference next year in Denmark, New Narratives of the Postcolonial Arctic. If you’re at EASA this summer, do come and say hello at the ArcticEncounters panel, ‘Polar Mobilities: Resilience and transformations’ (panel 020). One of the ways we are keeping the project as open as we can is to blog our research activities and tweet our events #postarctic. So there are many ways to keep in touch and many kinds of encounters to experience whether you are near or far.