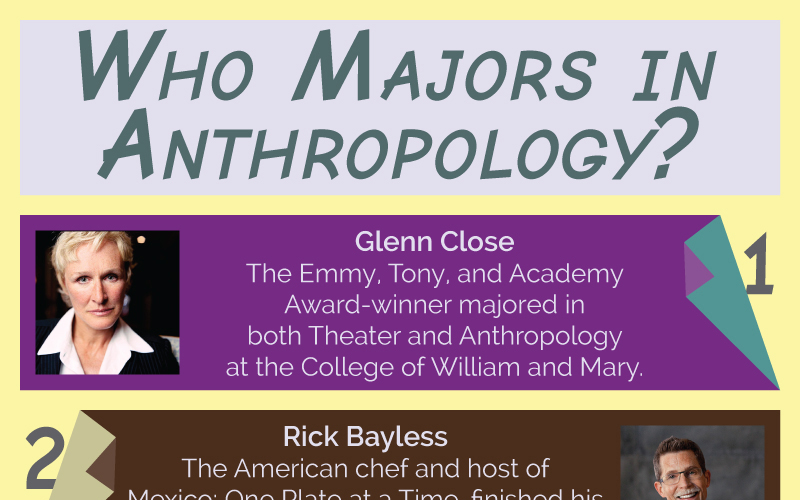 A little irked by the tone and skepticism with which some ask the question, “What can you do with a degree in anthropology,” I’ve decided to address the quandary with an infographic. Often, I’m confronted with the assumption that after finishing my Bachelor’s in Anthropology, I would find myself behind a bar or waiting tables. From my perspective, my question is “What can’t you do with a degree in anthropology?” I’ve taken at stab at answering this question here (after the jump), but I want help from Savage Minds’ readers to find lesser-known examples of influential former-anthropology students.

Of course, the debunking of the uselessness of an anthropology degree has already been undertaken in a number of ways. Notably, the textbook publisher Pearson Higher Ed developed a poster (“Leave your mark. Major in Anthropology.”) that lists the job titles that (implied by the use of the imperative “Major”) one can obtain with only a Bachelor’s. It leaves out the caveat that many of those careers require a Master’s degree, and probably in something other than anthropology. 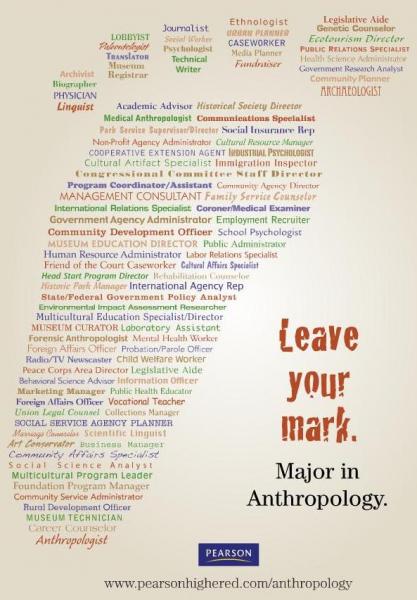 A couple years ago, the American Anthropological Association developed the website, “This is Anthropology” – a portal through which anthropologists can introduce themselves and their work to the public. I’ve certainly found it useful for professional networking, but I wonder how many high school juniors, seniors, and college freshman reach out. (Really, is there any data?)

I don’t mean to suggest that either of these efforts is in vain – they weren’t designed to withstand the tides of your Governor Rick Scotts and your FIRST Act of 2014s alone. No, these projects, others (e.g. BOAS Network), and many more in the future must weave a web that stands at the interface of anthropology proper and skeptical tax- and tuition-payers. This infographic (and the one that hopefully follows) is my contribution to that web.

What I want to do is use this infographic to dispel any notion that no one studies or uses anthropology aside from academics. It is designed to be easily shared, read, and even altered. This image features 24 people with degrees in (or at least very strong ties to) the field of anthropology – some you know (i.e. Kurt Vonnegut) and maybe some you don’t (i.e. Hugh Laurie). While those represented in this list are well-known people – actors, actresses, musicians, authors – I’d like to develop a second list of lesser-known, high-impact people – politicians, lobbyists, philanthropists, journalists, inventors, CEOs, television producers. And this is where you come in. If you are or someone you know is one of these people, please email me at richard.powis@gmail.com. Thank you!

63 thoughts on “Who Majors in Anthropology? An Infographic and a Request”