[This is an invited post by Elizabeth Chin, a professor in the MFA Program at the Art Center College of Design in Pasadena, CA.] 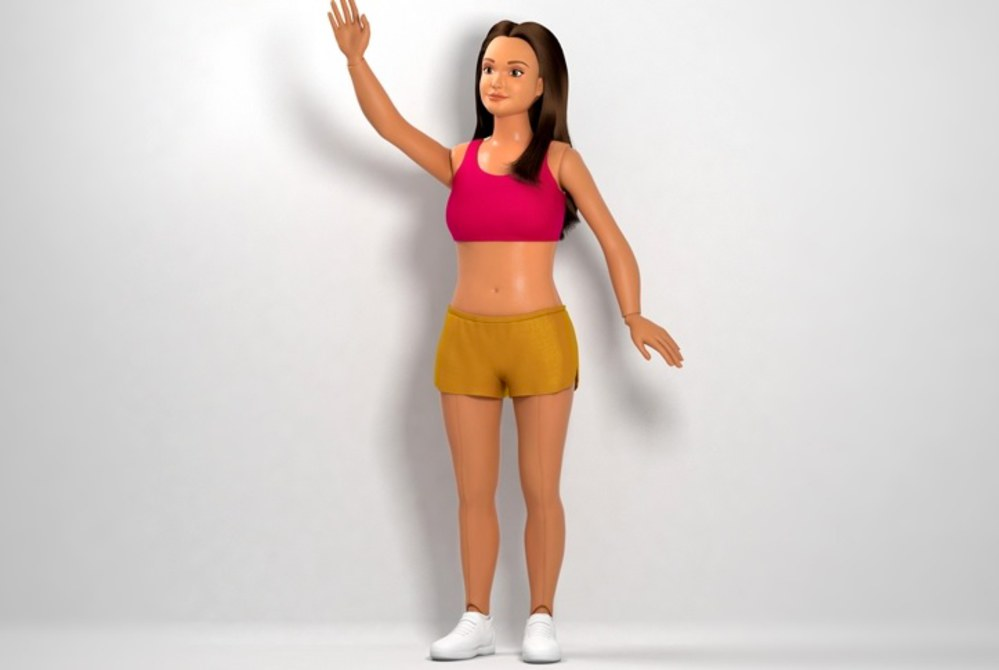 Last year, Nickolay Lamm made viral internet splash with his “real Barbie,” a materialization of the iconic doll that used the average measurements of a 19 year old woman rather than the endlessly criticized unrealistic proportions of Mattel’s super-selling doll. Now Lamm is taking that doll, named “Lamilly,” to production. I don’t want to be a hater, but I think Lamilly will tank.

One reason I think Lamilly is doomed is that this has been tried before. In 1991, Self Esteem Toys came out with the “Happy To Be Me” doll. Although the doll wasn’t crafted with the digital precision that clearly has shaped Lamilly’s limbs and features, Happy To Be Me and Lamilly look quite a lot alike. Both eschewed Barbie’s blonde hair and went brunette; both feature flat feet, and trim physiques. Do note that both Barbie challengers, while claiming to be “more realistic”, embody a version of realism where a woman’s thighs still do not touch.

The main reason that Happy To Be Me failed is instructive for Lamilly. Although lots of moms were excited by a Barbie alternative that seemed athletic and sensible, kids didn’t like her. In fact, Lamilly, like Happy to Be Me, is really a doll aimed at the moms (and dads) rather than the kids. Kids are likely to take to Lamilly about as much as they like lima beans. That is, not much.

The whole point of Barbie is that she is not real. There’s a real failure of imagination at work when people try to translate Barbie into a “real woman.” The dolls that have bit most enthusiastically into Barbie’s slice of the doll revenue pie are not realistic looking. Bratz and Monster High dolls are even less realistic than Barbies, with oversized, bubble heads, detachable feet, and (in the case of Monster High dolls) non-human backstories. Getting more real is hardly likely to generate much in terms of long-lasting revenue or de-Barbification.

But before we get all worried about girls, and self esteem, let’s also give the kids some credit. For over ten years, I taught a freshman writing seminar on Barbie at Occidental College in Los Angeles. In that class, one assignment asked students to discuss their own histories with Barbie. The range of activities was stunning, running the gamut from incidents involving explosives, to staged Barbie-Ken sex scenes, handmade clothing lovingly archived across generations, theft, psychic comfort, and of course, hair play. My own daughter had lots of Barbies when she was young and the only way she ever interacted with them was by stripping them all naked and tossing them into the tub. They’d float around, arms akimbo, as she utterly ignored them. The tossing was the point, as far as she was concerned. Another girl I interviewed explained to me that what she did with her ten Barbies was this: “I take their heads off and I go bowling!”

These kids’ engagements with Barbie hint that the “solutions” posed by Happy To Be Me or Lamilly may well be irrelevant. Repurposing ten Barbies into a bowling experience is a way more kick ass response to the Barbie than is producing a new consumer item that represents some government produced notion of “average.” Let’s not even get into the problem that Happy To Be Me and Lamilly are still white. Of course not all children’s play with Barbie is off-label or even oppositional. But the problem here is not really the Barbie, but the culture that produces Barbie. That culture is one in which children are marketed to with a relentlessness that begins even before birth; one where “pester power” is viewed by marketers as a legitimate and capture-worthy revenue stream; one where appearances matter, and matter greatly.

It’s just much too easy to blame all of that on Barbie. If we really want to figure out where to pull at the knotty problem of unrealistic beauty/body standards, we might do better to point the finger at body-conscious girl-oriented pursuits such as cheerleading, gymnastics, and ballet. Taken together, those fields take up more hours of girls’ days and nights than all Barbie play put together, and constitute a larger consumer market as well. I’m not against cheerleading, gymnastics, or ballet, but I’m well aware that the judgements placed on girls’ bodies on the playing field, on the balance beam or at the barre too often result in psychic or physical wounds that are deep, long lasting, and in some cases, devastating. Barbie makes a much easier target, in part because she is not an actual person who can be confronted. Nobody’s really pointing at all those coaches and dance teachers and telling them they’re creating massive self-esteem problems.

As an icon of fakeness, Barbie is well-hated and much maligned. It’s much too easy to think we can change the self-perception problem by giving girls better toys to play with. What we need to do is change the larger culture in which we all live and struggle, the one that emphasizes surface over substance, consumption over experience, the average over the individual, the constant over the quirky.

2 thoughts on “Why Lamilly Won’t Last”