What happens when dedicated people come together to work on a project they care about? Where do good ideas come from? How is it that some creations start off in niche markets and grow into global brands while others fade into obscurity? In his latest foray into Japanese popular culture, The Soul of Anime: Collaborative Creativity and Japan’s Media Success Story, Ian Condry offers ethnographically grounded theory for the study of creativity. The work can be read as a synthesis of the best practices in the field of pop culture studies from anthropology and cultural studies. 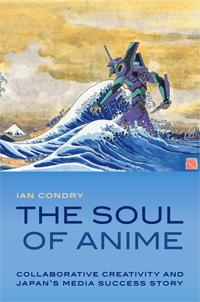 Condry describes the efforts of dedicated artists and producers working in a “crucible” atmosphere of “collaborative creativity.” Their collective social energy is the “soul” of their shared engagement with the project. Therefore this study offers something other than a follow-the-money investigation, anime as Japanese national culture, or an interpretation of the content of anime, reading the text. Rather Condry seeks to follow-the-activity and commitment of small groups of people (mostly men) as they exercise creativity. It is the dynamic social relations, the connections between people in a working group that shine through here. Anime is emergent from the social practice of creativity and the collective values of that group as they define the importance of their own actions within a context.

Anime makes for a fascinating case study because, in the United States at least, it is known as an entertainment genre defined by its difference and passionate fan base. Although it is wildly popular in global markets, anime is not insanely lucrative. Further, there is SO much of it! All of this can conspire to make anime seem intimidating to the uninitiated. What makes anime so different? And why do people care so much about it?

Condry describes anime as a “platform” which makes the genre more world-centered and less story-centered. In his observations and interviews with creators and producers, he finds that their approach privileges character, premise, and world over story and plot. This is especially important for anime’s transmedia potential, flowing from books to TV to movies to video games to toys and back. Transmedia is about allowing each medium to do what it does best. The benefit of platforms, from the creator’s point of view, is that they generate and define. They give structure to creativity.

From the birth of an idea to committee meetings and deadlines Condry looks at the creative process behind anime, what the people involved value and why. The “soul” of creativity is the tension between collaborative social networks and the media objects they fashion. Condry thinks small and local, focuses on working groups, the act of creativity within the context of the group, and the influence of relationships within that social network. Collaborative creativity defines the social network in terms of what it accomplishes, which makes this markedly different than a study of group identity.

For Condry, “social energy” derives from people who care. It emerges from the shared interest and commitment among group members and is rooted in the relationships among participants in the group, whether we’re talking about creators or fans. Taking a page from the participatory culture of the Web, Condry recognizes fandom as another kind of collaborative creativity. There is a blurry line between fan and pro, both are motivated to impress their peers with their energy and commitment. Groups that work well together have an exciting buzz, a social dynamic and energy, and that is what keeps people coming back for more. “Status always seems a step away.”

We can no longer think of media as merely representational, it is real because the affective relationships among people that make use of those media objects are real. It is through fandom that we can see how social relations need not directly include other people (see the Idea Channel piece on Hatsune Miku in the comments below) but can also be inclusive of digital worlds and virtual experiences. So there is not a neat division between what is “fantasy” and what is “real,” rather it is activity originating in groups defining and generating value in a social context.

With a nod to Scott McCloud (whose classic, Understanding Comics, is a must read for fans and may be of interest to students of visual anthropology too), Condry argues there’s more to anime than representational content. For McCloud the comics reader must play a creative role as well, filling the gutter, that blank space between comic panels, with meaning. Collaboration depends on conversation between author and reader in the space between.

While most of The Soul of Anime focus on creators and producers, Condry includes an excellent chapter on the practice of fansubbing, fan made videos with subtitles translating Japanese dialogue into local languages, and another chapter on the new forms of masculinity among otaku fans who fall in love with fictional characters.

In the case of fansubbing the emergence of values out of social relationships comes to the fore with Condry providing extensive documentation for ethical debates within the community. The practice of fansubbing is a violation of copyright, but community members reject law in favor of their own code of ethics. Media companies like blogging and viral marketing, and may even give away content for free if they’re in control but fans posting videos online without permission is still piracy. Nevertheless fansubbers see themselves as helping media companies by disseminating their product into new markets with translations where commercially licensed products are not available. They see their piracy as “pro-anime,” and once commercial translations of an anime production are available pressure mounts from within the fansubber community to pull down pirated videos. Here we see the distinction between broadcaster and consumer blurred as Condry emphasizes that consuming popular culture is never passive but “something you do.” The space between viewer and content is filled with energy.

Fansubbers are particularly sensitive to portraying cultural nuances in their favorite shows, especially giving significance to historical settings and translating puns and local humor that audiences would not otherwise pick up on. Rival fansubber clubs compete with one another for the most “authentic” translations of anime productions, they value craftsmanship and at times will be stridently critical of translations they perceive as lacking. Fansubbers have their own fanbase and add themselves into the show credits with screen names and alter egos. Like with graffiti artists, social energy arises from the fansubber community by gaining status, earning recognition among people who are in the know.

How is that people come to be emotionally attached to characters? Some anime falls under the heading of moe (pronounced “moh-ay”), meaning that the characters, premises, and worlds (but less so the story) are meant to elicit a complex affective response that is at once passionate and at times erotic, but also nurturing and protective. “Feeling strawberry,” as one fan puts it. This is one of the aspects of anime that intrigues American audiences the most because it epitomizes a supposedly “weird” Japanese sexuality that fascinates and repels as it mystifies. When Japanese men declare that they want to marry fictional characters, what’s going on with that?

Condry relates this phenomenon to changing masculinities, in particular media consumption as expressive of masculinity, by drawing a contrast between the otaku and the salaryman. The label “otaku” is used to refer to super-fans, persons who express their devotion to media objects through cosplay (dressing up as their favorite characters), fan-made manga, and buying figurines and other merchandise. The salaryman is a dominant image of manliness in Japan, his masculinity is defined by production and his place in the world of work shapes his place in society and in the family. But not everybody gets the good education and lands the good job, not everybody has a happy family to come home to at night. If the salaryman is the ideal towards which men are expected to strive then what about the men who fail? Condry argues that the otaku redefine masculinity in terms of consumption rather than production, and establish an alternate community with new values that match the life that they actually lead rather than an unobtainable ideal.

The otaku community and their affective lives, intriguing and occasionally scandalous to westerners, is also one driven by the social energy of collaborative creativity. Frequently anime favored by otaku features vulnerable, conflicted, or powerless men. Shinji in Neon Genesis Evangelion is a prime example (see the video in the comments section). In this sci-fi series Shinji is neurotic, depressed, and has a poor relationship with his father but is a hero nonetheless because in the future there are alternate styles of heroic action. Moe then is not just a feeling, but a way to share feelings with others who feel the same. It is affect emergent out of social contact with fellow otaku, internal feelings are also a product of collaborative creativity. On the surface it might seem that the otaku represent a rejection of Japanese society’s unobtainable ideals for men, but Condry stress how moe is a plea for acceptance. Moe is a practice of immaterial consumption, an affective realm of consumption as performance recognized and valued by other otaku.

The Soul of Anime will appeal to anyone studying small groups of dedicated people working on a collective project and does not require prior knowledge of esoteric anime shows. Fans of anime and manga will also find something worthwhile here from interviews with well-known directors and artists to hidden histories behind popular shows (e.g. Japanese animation tends to be drawn first and then actors lay down the voice track, whereas American animation tends to start with the actor’s voice and then is drawn; manga could branch out into adult themes of sex and violence because Japan, unlike the United States, never had a Comics Code). As a casual anime fan I enjoyed learning about shows I hadn’t heard of before and appreciated the light shed on some shows I have seen but didn’t really understand. The Soul of Anime is fun and well written, easily comprehensible by talented undergraduates, and features helpful conclusion sections at the end of each chapter.

5 thoughts on “The Soul of Anime [book review]”