In Freedom in Entangled Worlds, the first book by anthropologist Eben Kirksey, Mellon Fellow and Visiting Assistant Professor at the CUNY Graduate Center, the reader is presented with a history of the merdeka movement in West Papua. This tale of magic, nationalism, and human rights in an “out of the way place” unfolds on a global stage as the author treks from the secret hideouts of guerilla fighters in the highland bush country to the seat of corporate power at BP headquarters in London. Along the way we get a master class in how an academic activist might balance post-structural theory with the kinds of strong knowledge claims that may influence political decision makers.

Indonesia formally incorporated West Papua into its nation in 1969 with the fraudulent Act of Free Choice. Since that time West Papuan leaders have pursued independence, or at least increased autonomy, for their region through many, often contradictory, means. From political engagement with the Indonesian state to pleas made before the international community tribal leaders and educated city dwellers have risked their lives through armed resistance, peaceful protest, and magic pursuing their dreams of freedom. The odds seem insurmountable and the movement itself endures near constant crisis, thus the theme of crisis as a sign of hope runs throughout this short, adventurous ethnography.

In a revealing scene towards the end of the book, Kirksey, finding himself in the halls of Washington power (and the crosshairs of an FBI investigation), forms alliances with other activist organizations such as the East Timor Action Network. Frustrated that his investigation into the murders of some American school teachers outside a Freeport MacMoRan mine is largely being ignored by those in positions of power he learns an important lesson every anthropologist who wishes to speak truth to power must learn.

“Politics isn’t about facts but about stories,” the director of ETAN tells him. “Your story is too complicated.”

That complicated story features some big theoretical guns too, principally Derrida and Deleuze, in whom the author finds fertile fields to grow ethnographic insights that criticize and expand some small corners of those theorists’ expansive domains. The result is a productive contribution to political anthropology and social movement studies in a post-structuralist vein that may serve us well even outside the narrow ethnographic focus of Kirksey’s research.

From Deleuze and Guattari is taken the idea of the rhizome, a notion that has grown in popularity lately as a figure of political resistance. Rather than forming hierarchical structures the rhizome develops horizontally, building underground movements that are notoriously difficult to disrupt. But Kirksey sees new possibilities in the figure of the banyan tree, a native of the Papuan forests, “With vast networks of aerial roots that grow into interlocking arboreal structures,” he writes, “banyans exceed the form of Deleuze and Guattari’s rhizome.” The banyan is both hierarchical and rhizomatic! 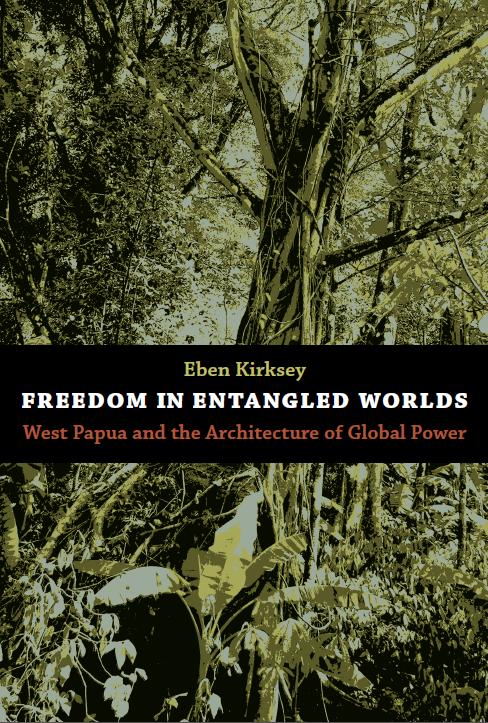 The banyan tree is the symbol of Golkar, the political machine of Suharto, the second President of Indonesia who ruled that nation for thirty-one years before resigning 1998. It was also the symbol of royalty in pre-colonial Javanese kingdoms. Beneath their canopies of interlocking branches entangled structures form by the fusion of aerial roots and other plant life is shaded out. But from the margins of the nation in far flung West Papua, local leaders were not dwarfed by Golkar’s banyan. Instead they found possibilities within its structure. These activists, “began to undermine, climb, appropriate, and replicate the architecture of domination… While rhizomes are trapped in plateaus – a steady state where climax is avoided – banyans build on inherited structures to generate novel forms.”

So here is our metaphor of power: banyan trees, known to botanists as structural parasites, are rife with knots, tangles, and physiological fusions; they do not pump nutrients from their hosts as do true parasites, but merely use them for architectural support. Such entanglements are messy and difficult to escape. Likewise in the unfolding narrative of West Papua’s merdeka movement we get this strange political game where, at times, it is difficult to tell if the Indonesian government is co-opting the merdeka movement, or whether the merdeka movement is exploiting the government. Kirksey rightly calls these, “strange collaborations,” with public interactions out in the open and plenty of dirty work going on backstage.

It is ironic that the banyan is a member of the same genus of plants that includes the fig tree. As a model for social movements I found it intriguing to reflect that only some such species of banyan produce tasty fruit that is edible to humans. It is as if to say that only some configurations of the hierarchical rhizome will produce democratic outcomes, others may be totalitarian.

In this ethnography nationalist dreams, whether Indonesian or West Papuan, are frequently marked by magical thinking and ritual performances intent on divining the future or projecting action at a distance. Hostilities between Indonesia and Papua overlap in the supernatural realm as the conflict becomes not just one of humans, but of volcanoes and vampires, earthquakes and unearthly beasts. Paramilitary soldiers take on powers of invisibility while resistance fighters become bullet proof.

But there’s a congruency between the magical worldviews of the natives and the “speculation, fantasy, and fabulation” on the part of multinational corporations such as Freeport MacMoRan and BP. Claims that are just as spectral and hard to pin down. Corporate promises and slick talk are another performative genre of divining the future and projecting action at a distance. It’s a classically surrealist move, making the civilized into the primitive and it’s a move that sets the stage for the second half of the book.

What good are the likes of Derrida and Deleuze for the freedom fighters of West Papua? One of Kirksey’s informants sees such posturing as useless. Instead he advocates for the kind of knowledge production that will have currency among official channels. “Don’t use your data as a pillow,” he warns. It’s a brilliant moment of metacommentary where the author and his interview subjects are commenting on the text as we’re reading it and it signals a transition into a kind of ethnography of ethnography. Through the lens of West Papuan human rights issues Kirksey pivots to address methodological issues by documenting his collaborative work with local movement leaders.

If we were cynics we might say that this is primarily a rhetorical move by which the author creates an authentic identity for himself, a sort of diplomatic passport that lets him pass between the world of academe and that of the activist. It is, however, quite well done. Here Kirksey reflects on his personal professional development and becomes a central character in the book. The author does a fine job of making this into a page-turning adventure of murder, massacre, and interviews conducted under the cover of darkness driven by the inherent urgency of human rights and his own passion for the cause, but without sensationalizing it.

For example, in the so-called civilized world’s heart of darkness at BP headquarters in London he meets with the CFO and senior VP for Indonesia, “Suddenly face-to-face with some of the most powerful men in Europe, I felt adrenaline rush through my veins,” but they challenge his credibility. He helps to write a news story for the Sunday Times and gets interviewed by BBC World Radio, broadcast live. In Washington he gives presentations to the staff for Congressional committees and the State Department. He gets stalked and harassed by the FBI, and “Suddenly my own entanglements with West Papuan political projects had become extremely personal and uncomfortable.”

In other words our post-structural anthropologist needs to learn how to operate in spheres dominated by positivists with the goal of producing sets of strong objectivity claims. The reader is brought along with him as he practices and hones this ability. His growth is our growth. This section of the book exemplifies how one might navigate the treacherous politics of knowledge, documented so well by Said and Spivak, and still emerge with something that can influence those in positions of power.

“A palm tree that has been engulfed, but not choked to death, by a strangler fig illustrates the awkward, yet enduring, relations that persist among entangled ‘enemies’ when a clear endgame is not in sight.” West Papua is a small nation under pressure from larger nation-states (Indonesia, the U.S.) and global capital. But in the spirit of the theme of entanglement the Papuans are neither resisting nor capitulating to these superior forces. This is an indigenous strategy of confronting power that like the banyan retains the capacity for surprise.

With its highly creative, mid-range theoretical innovations Freedom in Entangled Worlds will be of special interest to theoretical anthropologists studying social movements. Its brevity and adventurous tone will make the book an excellent fit in a theory class for talented undergraduates or junior grad students. Although I enjoy dabbling in French post-structural literary theory and psychoanalysis it has never been clear to me until now just how we are to connect that to the ethnographic. I felt that I came away from this book with a clearer understanding of some difficult primary authors and an appreciation for how anthropology can be relevant on a global stage.