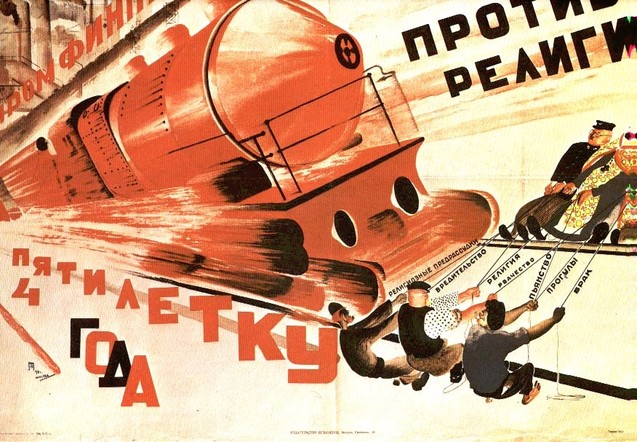 [Against religion, for the 5-year plan in 4 years.]

When talking to students about their future I always suggest they make a 5 year plan. Not because of any nostalgia for Soviet-era policy making (although I do like their posters), but because it seems to me to be about the farthest ahead one can reasonably make long-term plans. Sort of like how weather reports stop being useful once they go beyond the next three days. Life is just too random to think about what we’ll be doing ten years from now. But I think five years is reasonable.

I suggest to students that they start with where they want to be in five years and work backwards. This is useful because it adds and element of long-term planning beyond the question of what they want to do next. For instance, taking a year off to travel might be a great idea after college, but if they want to be completing an MA in five years time, it would be good to be researching MA programs while they are on that year off, maybe even sending off an application or two. And for Ph.D. students, it helps them think about all the things they might need to do before they finish their Ph.D. If they want to be writing up in 5 years, then they need to take their qualifying exams, write their proposal, do their fieldwork, etc.

Five years just seems to put these things in perspective. It may not be so important if you are a tenured professor and all that matters is getting the next book, film, journal article out year-by-year, but I think it is a great tool for those who are planning to embark on a new stage in life. If you’ve just had kids in about five years you’ll be thinking about schools: where do you want to live? If you just finished graduate school, you’ll probably only be able to work as an adjunct for so long: do really want to stick it out on the academic job market beyond that point? And if you are a junior professor thinking of tenure: will you have a book done in time?

It can be stressful thinking of these questions, which is why we mostly avoid them. One of the main benefits of a five year plan is forcing yourself to think through the tough questions that need to be asked about your future. As to whether or not you end up sticking to your plan, for me that’s much less important. In a couple of years you can make a new plan…

2 thoughts on “Planning Your Academic Career, Five Years at a Time”