[This is a guest post by Gabriella Coleman. Gabriella is an assistant professor in the Dept of Media, Culture, and Communication at NYU. Her work examines the politics of digital media.] 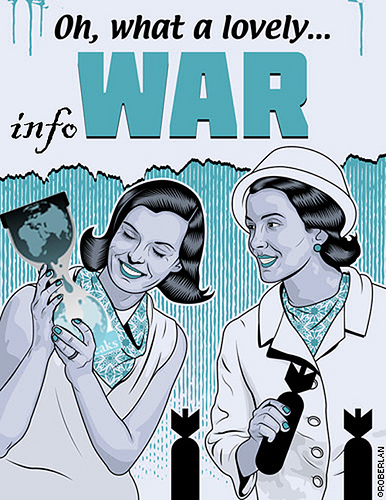 As an anthropologist of the digital I tend not to treat digital media as exceptional, except when it comes to the few exceptions that seem to rub up against our traditional categories and methodological tools. Anonymous, the online entity that has recently erupted full force engaging in wave after wave of protest following the Wikileaks drama, seems to be one such exception.

For those that know nothing about Anonymous it is a challenge to characterize in the course of a few sentences. But largely because of the recent distributed denial of service attacks, journalists have been on a spree to describe Anonymous, so far, largely telescoping on the DDoS and as one journalist put it, the “darkened” chat rooms many an anon are to be found. In the process, a number of them have correctly characterized the social dynamics that unfold on these chatrooms but they have also at times fallen prey to problematic descriptions and it is no surprise that I have highlighted “darkened chatrooms” to kick off the critique of the coverage of Anonymous that relies on outdated and inaccurate stereotypes of computer users. I will provide an alternative view focused on the aesthetic faces of Anonymous.

While it is partly accurate to describe some irc programs as “dark” in so far as some of the popular clients like irssi, have a black background, many do not. Here darkened functions rhetorically to conjure images of pimply basement dwellers who are raising havoc on IRC, an underground bunker (think dark, damp, and moldy) where great nefariousness is concocted, which in fact the TV show CSI once portrayed in exactly the same terms (though inaccurate, it is quite humorous).

Another Guardian piece, makes some good points but also makes a questionable statement that anonymous is “a loose collective mainly of teenagers.” This may true; it might be reasonable to suggest this as it is likely that many teenagers are involved but there is no way to state as fact, as it is quite hard to characterize things like the age, gender, and background of participants on IRC, especially when there are thousands of folks logged on, some of them also being journalists, researchers, bots, and lets’ not forget the FBI, which are the subject of some of the best humor on the chat channels.

But I do think it is safe to say that at least on IRC, Anonymous is composed of geeky types since they tend to know how to get on IRC whereas non-geeky types, have a bit of trouble doing so (for those that want to try, it is easy). But geeks come in all ages, not just tweens and teenagers. From my experience working with another face of Anonymous, there were a handful of teenagers, although the composition of Anonymous I was interacting with (which is not All of Anonymous) tended to span 20 to 30 year olds, with some older folks also intimately involved and more women than I see in some geek circles and I was only able to make this characterization once they moved to the streets.

But does should I use my experience working with Anonymous vs The Church of Scientology to make claims about this iteration of Anonymous?

There are some commonalities across the difference faces of Anonymous; there is a common stock of cultural knowledge and aesthetic imperatives that helps shape tactics but what holds true for one iteration of Anonymous, does not hold true for all for Anonymous has a built in system for insatiability and change.

So with this in place I want to make some points more general points about the cultural dynamics of Anonymous:

So in conclusion: I don’t think I have ever used a term that was enormously popular to describe the net in the 1990s–rhizomatic–but Anonymous does seem rhizomatic: yet there the rhizome exhibits some consistency, even as it morphs and spreads. Anonymous of the past set into a motion an aesthetic and set of tactics that help guide, even if they don’t determine, the shape and form that Anonymous will take in the future.

UPDATE: Some small changes at the request of the author.

2 thoughts on “The Aesthetic Face(s) of Anonymous”