General-ly speaking: This fall I’m teaching General Anthropology for the first time in like five years, so I’m on the lookout for new ideas to spice up a course that, in all likelihood, is the only exposure most undergraduates will have to the discipline. Interesting assignments like this project in web design about students’ international travel experiences could be one antidote to the standard issue essay assignment. In my intro classes I always forward a strong argument against race thinking, but I’m a little apprehensive about using Neanderthal genomics to debunk the idea of race. It sounds like an interesting idea but I’m a little unsure about it. Maybe someone in the comments section can speak to this? In place of race thinking, anthro textbooks trot out a short list of go-to examples of human variation as rooted in evolutionary adaption to environment. One of these classic examples is how populations that live in high altitudes are barrel chested and can make better use of the thin air. Anthropology.net pointed me to a May 13, 2010, publication in the journal Science that backs up these claims with genetic studies of Tibetans. Last but not least, the highs and lows of the new “nature” documentary Babies: The Film are well covered by Teaching Anthropology. The video preview reminded me somewhat of the beautiful Material World and Hungry Planet books (the latter I’ve used in my Food and Culture class) which also have their limitations but are still very thoughtful conversation starters.

There’s no accounting for Tastebook: Facebookers will remember that not long ago one could “become a fan” of this and that (I became a fan of Duke losing), but recently that has been replaced by the same “like” button used to comment on friend’s updates and photos. The International Culture and Cognition blog asks an interesting question, why make our preferences public? One answer, the blogger suggests, is that the user builds cultural capital by associating themselves with certain products or celebrities, but I’m not buying it. I’m going to pick Freud over Bourdieu in this instance and claim that clicking the “like” button is about the pleasure principle. People enjoy hitting “like” and that’s what motivates them to participate in its narrow evaluation of everything. But the bigger question may be: can social theory explain why there is no “dislike” button? (Or is it simply that that would make Facebook too much like Digg?)

Damn dams: Terry Turner reports, via the blog Anthropologyworks, that the Brazilian government has renewed efforts to dam major tributaries of the Amazon in the Xingu Valley. The article offers compelling reasons against progressing with the dam project in terms of the loss of indigenous land reserves and biodiversity, but its the local and national social movements that have coalesced around opposition to the dam that is really fascinating to the anthropological observer. This feature length story is briskly written. A good read.

Late(r) capitalism: Around the time of the Enron collapse questioning the ideology of free market capitalism gained some legitimacy outside of the anti-globalization social movements and academic left. Then in subsequent years that furor died down somewhat, Sarbanes-Oxely didn’t seem to have any teeth, and it was business as usual. Now the Great Recession, the Greek debt crisis, and the Deepwater Horizon oil spill have brought some of those questions back to the popular imagination. Three links on this subject were forwarded to me all last week: an exerpt from the book Ill Fares the Land , a David Harvey for laypeople type essay in Salon , and a provocative graph showing increasing disparities in wealth distribution between Whites and Blacks. The theme here is that “the people” are sick of the Wall Street fatcats and want a return to American industrial prowess. You can color me skeptical. The recent victory of Rand Paul in the Republican primary for Senate in KY shows that free market fundamentalism is alive and well. This current crisis is a blip, its going to take more, much more, to force ideological change in the US.

Baseball Fandom: Baseball is one of those things I just don’t get. I mean I’ve been to a few minor league games – the Durham Bulls, back when I was at Chapel Hill – and its fun to drink beer in the sun with your friends, but I certainly don’t see the appeal of watching the sport on television. Regardless I enjoyed this insightful reflection on being a NY Mets fan. Why do people root for a team that consistantly dissappoints? Why do fans chose to identify with a team that keeps getting beat?

Maps of the Middle Ages: Here is a cool article in the Washington Post about a conference sponsored by the Library of Congress on portolan maps of the sixteenth century. What beautiful objects!

This week in the future: Anthropology. Science Fiction. Two great tastes that go great together? I give you African Cyberpunk. If you can’t make it to class, send your Anybot to deliver the lecture, but don’t blame me if your students send Anybots to take notes. Paging Lawnmower Man, we’re getting closer to immersive virtual reality (I hope the cognitive anthroblogs pick this up). Oh, and artificial life is now a possibility too. “Naturally I would use artificial life to clean up environmental pollution and cure diseases, but of course my first order of business would be creating a woman that looks like Kelly Le Brock in Weird Science.” Just be sure to watch out for those six-legged timber cutters, though I’ve heard they’re perfectly safe. At least until Skynet is up. Yep, the future’s going to be a pretty strange place. And its where we’ll be spending the rest of our lives.

Not Taking this Lying Down: Check out this collection of photo images of discarded mattresses. Hey! I’ve got some of those from my fieldwork too! Great minds think alike, eh? 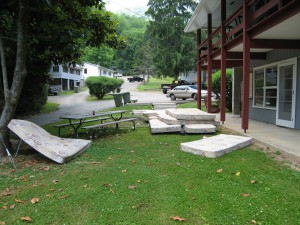 Seen something around the web that you would like to share with the Savage Minds community? Email me at matthew.thompson@cnu.edu

5 thoughts on “Around the Web”