A little bit ago a few tweets crossed my transom about Adam Bohannon’s excellent history of anthropological theory timeline. It’s fun and it looks like it was made with CHNM’s timeline builder. I had actually tried the same tool long ago but then sort of abandoned the project and so inspired by Adam revived my old project (this time using BeeDocs’s Timeline Maker). Here is a sample: 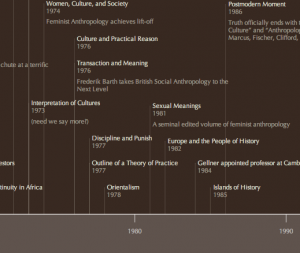 You can get the full version here. It is a totally non-interactive .png file — sorry, Adam beats me on the interactivity front.

Timelines are interesting in the same way that kinship diagrams are: they are analyses of materials pretending to be merely lists of facts. This one was constructed basically off the top of my head based on what I’ve been teaching in anthropological theory courses, and which Wikipedia pages linked to which. Choosing which dates to put up is basically to create a useable genealogy for yourself. Its a fun exercise — among other things, it really made me realize how much of what I thought of as ’80s theory’ was really published in the 70s (77 seems to really be the watershed year here). Any feedback?