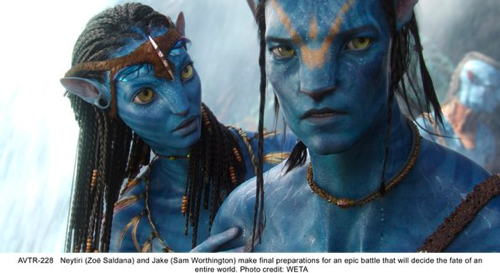 I recently had a chance to see the movie Avatar in glorious IMAX 3D, which is the only way I would recommend anyone see the film. It is certainly not a film one sees for the writing, or the characters, or the story telling. It is a spectacular display of visual pyrotechnics, and I should probably leave it at that. However, the film is like a giant anthropological piñata and after two days of sitting on my hands I can’t hold off any more.

[I don’t think I mention anything in this post which you couldn’t gleen from the trailer, but I’ve posted everything after the jump to help those particularly worried about accidentally encountering spoilers.]

First of all is the issue of race. I certainly am not in the mood to discuss whether the film is racist, yet I do think it is worth noting the way the film depicts the long-standing fantasy about ceasing to be white. I think the real problem with depictions of the other used in the film is that they are so clichéd that the Na’vi are boring and predictable. You are not really interested in learning more about them because you almost immediately feel as if you’ve met them a hundred times before, in other Hollywood films.

The second issue of interest is that of the Na’vi language. The SLA blog has a post about the work which went into creating this langauge. It is also worth repeating the observation that humans in American science fiction films almost always seem to be English speaking white-folk. At least in Firefly they cursed in Chinese.

The third issue of interest to anthropologists is that of virtual worlds. The film’s title comes from the fact that the humans interact with the Na’vi via virtual bodies, which seems primarily to be a plot device to allow most of the action to be computer generated without entering the uncanny valley. (When virtual humans mimic real humans too closely the small deviations from reality become more noticeable.) I can’t help but feel that they really missed an opportunity here. As I wrote about in my review of Tom Boellstorff’s book Coming of Age in Second Life, one of the most interesting things about virtual worlds is how complex the interaction between humans and their avatars can be. People can have multiple avatars, or “alts.” Different people can control the same avatar. And there are numerous problems raised when people are away from their keyboard but the avatar is still there. Of these, only the last one is even possible the film, due to the premise that each avatar has a unique genetic bond with a particular human. A little more complexity here could have made the film’s story line less predictable. [UPDATE: For more on how Avatar got Virtual Reality and networking wrong see Liz Losh’s post, Avatarded.]

Finally, the film is interesting for being a cinematic representation of anthropology. Sigourney Weaver’s character, Dr. Grace Augustine, is officially referred to as a “xenobotanist” but the work she does with the Na’vi and the book she wrote about them seem very anthropological. (I couldn’t find an image of her book cover, shown briefly in the film, but it looks like an anthropology textbook.) It is not Grace, but the main character, Jake Sully who is offered a chance to learn the ways of the Na’vi and who goes “native.” The use of avatars to do ethnographic research is interesting enough, but what really makes this notable is the fact that he’s doing it for the military. In fact, his triple loyalties: to his military/corporate bosses, to the scientists, and to the Na’vi themselves, are a central source of tension in the film. As Bill Guinee noted on Twitter, it is hard not to see this as a commentary on HTS. [UPDATE: Just after I posted this, I came across the latest David Price Counterpunch article…on Avatar and HTS.]

But, like I said, the film’s script is so vapid, that it isn’t really much of a commentary on anything except the state of 3D visual effects, which are pretty damn impressive if you ask me. Especially when seen in IMAX…