Ah, ’tis the season to be piled high and deep. Hmm, no, that’s pretty much every season.  Ah hell, here are a few things found ’round the web. 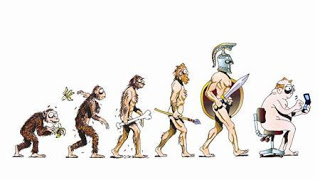 Manthropology (stop giggling): It’s late, and I have so many manthropological jokes.    But I digress, much like modern man, according to this book review from Reuters.  Over at anthropology.net, they review this plus another new book, Darwin Lives! (Think of it as the “Young Frankentein” take on human evolution).

Lorenz at antropologi.info interviews Dai Cooper, the student who released “The Anthropology Song” on youtube.  Lorenz asked Dai whether she was going to hit the conference circuit.  Her response:

Hah actually several people have suggested that by now. I’d be super flattered if that happened! I did actually offer to play it at the AAA conference in December, it was half-joking, because I don’t think they’d take me up on it – but I’d just love to share the song and the sentiments behind it with anyone who likes it. It makes me happy.

And Lorenz updated his post–Cooper was invited to perform at AAAs!

Metaconfusion: What do you get when you take faceless data-recognizing software and set it loose on the internet doing the thankless job once performed by an army of unrecognized bibliographers?  A good joke, for starters.  Stephen Chrisomalis at Glossographia explains.

Ok, that’s all I got.  In the mean time, I suggest we hold a competition for the best manthropology joke in the comments section.

5 thoughts on “Savage Minds Around the Web”