Uterus Unsafe for Children: Feminist Law Professors let us know that a Uterus plush doll has been recalled as a safety hazard. 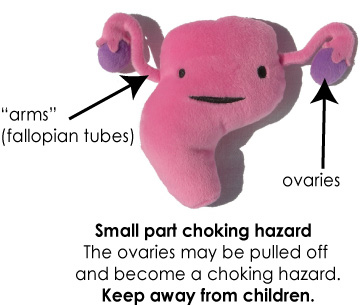 Also, Feminist Law Professors have been chased out of North Carolina due to attacks on free speech. Read here. 1, 2.

Community of Learners: Michael Wesch posted on his latest pedagogical experiment. 16 Students in his class had to find five unique articles each, post a summary of each article, and meet the next week to discuss 94 articles. You can see the results of the experiment here.

In tangential news, Stephen Chrisomalis at Glossographia just posted his own rant on the uselessness of textbooks.

Break Out the Map: A couple of bloggers at HASTAC have started a new blog in preparation for a course they will teach at University of Washington in March. Mapping the Digital Humanities has a cool design and concept–blog entries with potential lessons, readings, a shared RSS feed with articles of interest. Check it out.

Hip to be a Hater: John L. Jackson’s blog is latest target of commentators accusing sociocultural anthropology of being neologistic, irrelevant, and unscientific. Jackson’s response: Please!!! I especially liked his raising of legalese as a more obtuse vocabulary by a more socially privileged community.

Lonely Lucy: It’s becoming a sad story in Seattle for the oldest humanid fossil ever discover. The remains of the 3.2 million year old human ancestor is on display for the first time outside of Ethiopia. In what was supposed to be a financial boon for the Pacific Science Center and a public relations dream for Ethiopia according to the Seattle Times, the poor turnout has become a big disappointment and caused other institutions to back out of the proposed 10-city American tour. [Also: check out Cosmic Variance for their comments on why a $75 entrance for a family of four isn’t a good way to get kids interested in science.]

Notes From the Field: Christine Folch is blogging from from the field, and this week explained how to recognize a Paraguayan ponzi scheme

A Cautionary Tale… Finally, this week National Geographic reported on a new psychological study out of the U.K. that suggests that heavy caffeine users (seven cups of coffee a day or greater) are twice as likely than non or low users to “hallucinate, hear imaginary voices, and even sense the presence of deceased people.“

2 thoughts on “Savage Minds Around the Web”