So I have an announcement: I have written, and published, A Book. I know that Savage Minds readers harbor the suspicion that we are all just doing this gig until someone pulls the curtain back and we have to dust off our barista aprons and work for a living, but I am actually in this for the long haul… The book is called Two Bits: The Cultural Significance of Free Software, and it is produced by the punkrockingest press ever, Duke University Press. It is now available for purchase, for download and for derivation and remixing. 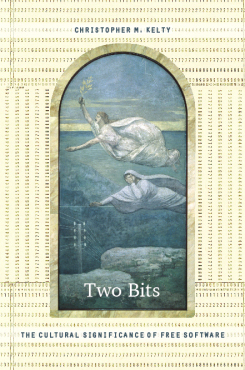 I am extremely happy to finally be able to announce its arrival. I’m also happy to announce that it is part of a series edited by Michael M.J. Fischer and Joe Dumit called “Experimental Futures” of which Jeff Juris’ excellent book Networking Futures: The Movements against Corporate Globalization is also a part. And as well to thank HASTAC for helping out in its publication and in marketing it as well.

Two Bits has taken a long time, and it’s a better book for that. In some ways, it is untimely: the moment of Free Software is over– both the media and many of the scholars who focused so much attention on it starting in about 2000 seem to have moved on to some other next big thing. This is a shame, but predictable given the drive for novelty and for being first in academia. But I think (and I will throw modesty to the wind here) that anthropology has a tack on such things that is slower, more coherent, and more concerned with a certain precision in charting historical changes. I like to think that the book isn’t only about free software, but an anthropology of knowledge circulation more generally, and I hope that it interests even those who are too cool for old school.

Obviously I hope that others think the same thing, and I expect people to read it in light of the current peak of interest in web 2.0, social networking and internet celebrities, or whatever, which might be usefully re-thought through the lens of Free Software. And maybe it might just convince a few people, scholars especially, that the moment of Free Software is definitely not over, and that there is some really incredible scholarship out there by people like Gabriella Coleman, Matt Ratto, Shay David, Casey O’Donell, Jelena Karanovic, Anita Chan, Samir Chopra and Scott Dexter, Jenny Cool, Allison Fish, David Hakken and Karl Hakken, Jeff Juris (my labelmate!), Bernhard Krieger, Karim Lakhani, James Leach, Siobhan O’Mahoney, Greg Vetter and many others on these topics. Like the scholarship emerging on gaming (with Rex representing), that on Free Software constitutes a major locus of scholarly concern and questioning that should be the basis for understanding much of the recent past and near future.

Having been through the process of publishing a book, like oneman, I wish we could publish our books faster, and try to merge some of the timely but ill-considered insight of the blog-form with the deliberate and peer-reviewed caution of the book-form… but I’m nonetheless a committed modernist in that I think the book-form has a quality that no other form of communication has, and it has taken centuries for that quality to develop. Nonetheless, nothing lasts forever, and since this is a book about software, there are a few special things that I want readers to know about this book: