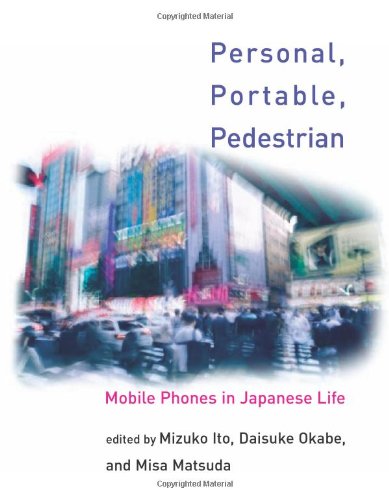 Mizuko Ito, an anthropologist who specializes in technology and youth culture in Japan, has announced on her website that she with Daisuke Okabe and Misa Matsuda (a psychologist and a sociologist based in Japan) has co-edited a volume titled Personal, Portable, Pedestrian: Mobile Phones in Japanese Life. (via her brother, Joi Ito)

Aside from making available the table of contents (in her post), she has also posted the introduction to the volume as a pdf file. See also some of the backcover endorsements at MIT Press, the book’s publisher.

In reading through this introduction, the following two paragraphs caught my attention. She discusses how keitai (the Japanese word for mobile phone) technology, despite the fact that it was first targetted for the savvy business person, has effected a new kind of interpersonal “intimacy.” Then from this focus on intimate social relationships she opens up her analytical aperture to discuss how it has been used “outdoors.” There she observes the way these tiny communication devices have “coloniz[ed …] the small and seemingly inconsequential in-between temporalities and spaces of everyday life.”

One cross-cutting theme is the salience of “the personal” and discourses of intimacy in keitai communications. Decisive was the shift in the late nineties from keitai primarily identified as a business tool to identification as a tool for personal communication and play. Now, even when being used for “serious” work purposes, keitai in the workplace and in public places generally (and often negatively) invoke “personal business.” Even before the keitai Internet, voice communications created a juxtaposition between private affairs and public place, tagging the keitai as a narcissistic device that invaded the communal with the demands of the personal. Now, widespread mobile email and other online communication tools mean that these intimate spheres are even more pervasively present; mobile text and visual communication can colonize even communal places where telephony would be frowned upon (ie., public transportation, classrooms, restaurants). The micro-coordination between family members and the ubiquitous spaces of intimacy between young couples and peers are the most evocative of these new dimensions of always-on intimate connection. Even workplace studies have documented the keitai’s now indispensable role in coordinating small and tightly coordinated workgroups. These tele-cocoons and full-time intimate communities represent an expansion of the long-standing sphere of intimate relations. The papers in this volume have only just begun to explore the profound implications for the production of social identity, the experience of public and urban spaces, and the structuring of institutions such as the households, couples, and peer groups.

This dimension of the pervasively personal is tied to an out-of-doors and low-profile vision of informational and communication networks which goes against the metaphors of indoor, immersive experience that have dominated our imaginings of virtual reality, cyberspace and Internet social life. The keitai’s social value is tied to its colonization of the small and seemingly inconsequential in-between temporalities and spaces of everyday life. Whether it is the quick text reminder sent by a multi-tasking housewife, the service technician who wants to keep track of which of their team members is out to lunch, or young couples texting sweet nothings as they take the bus to school, keitai connectivity is a seeping membrane between the real and virtual, here and elsewhere, rather than a portal of highfidelity connectivity that demands full and sustained engagement. Metaphors of keitai engagement are as often side-by-side as they are face to face, as much about ambient and peripheral awareness as they are about demanding attention in the here and now.

This is thought-provoking for me and it resonates with what I had always thought about the use of mobile phones. The way people (at least in Japan, although this I guess might be catching on in the U.S.) keep photos of friends in their keitai had always reminded me of Christian Metz’s discussion about how photographs are akin to the Freudian notion of the fetish, in part because of the portability of printed images (as opposed to film) (Christian Metz, “Photography and Fetish” October, Vol. 34. (Autumn, 1985), pp. 81-90.

One thought on “Studying Keitai (or ‘Mobile Phones’ in Japanese)”